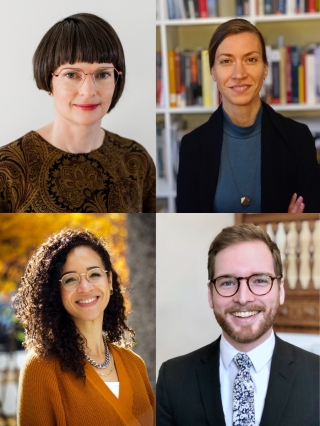 The Faculty of Law is delighted to announce four appointments for the 2022-2023 academic year.

As was previously announced, Sarah Riley Case, following a year as Boulton Junior Fellow, will begin as assistant professor on 1 August 2022.

Professor Jennifer Raso (SJD, University of Toronto; LLB, University of Victoria; BA, Concordia University) studies how algorithmically driven technologies transform administrative decisions, and the consequences for procedural fairness and substantive justice. Her research has been funded by the Social Sciences and Humanities Research Council and Australia’s Endeavour Fellowships Program; cited by the United Nations Special Rapporteur on Extreme Poverty and Human Rights; and recognized by the Canadian Law and Society Association (best article prize, 2018) and the University of Cambridge (Richard Hart Prize, 2016). Her recent scholarship appears in the Oxford Handbook of Administrative Justice, the University of Toronto Law Journal, the Canadian Journal of Law & Society, and PoLAR: Political and Legal Anthropology Review. She is the principal investigator on a SSHRC-funded study of how technologists translate written laws into code, and is coauthoring a book on data-based governance. She is assistant professor at the University of Alberta’s Faculty of Law.

Konstanze von Schütz researches and writes about private law, with emphasis on property law. Her work examines the fundamental ideas and building blocks of private law from theoretical, comparative, and historical vantage points. Her most recent projects focus on the role of owners and property rights in the common law and the civil law traditions. She joins McGill Law from Yale Law School’s Center for the Study of Private Law, where she is Fellow in Private Law. She is completing her doctorate at the University of Toronto’s Faculty of Law, and was a visiting researcher at the Max Planck Institute for Legal History and Legal Theory (Frankfurt a.M., Germany). She holds an LLB (Bucerius Law School), as well as the First and Second German State Examinations. She practiced law for several years before obtaining an LLM from the University of Toronto.

Jérémy Boulanger-Bonnelly is completing his SJD at the University of Toronto, where he is a Vanier scholar and Pierre Elliott Trudeau Foundation scholar. He graduated from McGill Law’s Honours BCL/LLB program as a Loran scholar in 2015. His research focuses on access to justice, and intersects with civil procedure, dispute resolution, comparative law, and constitutional law. His doctoral dissertation explores the role of public participation in improving the accessibility and quality of our justice system, notably through civil lay courts. Chair of the Canadian Bar Association’s Access to Justice Subcommittee, he is involved in various community initiatives, including pro bono cases and a legal information clinic. This year, he was a course lecturer at the Faculty of Law, teaching advocacy and legal ethics. Before his graduate studies, he practiced as a civil litigator in Montreal and served as a law clerk to Justice Clément Gascon at the Supreme Court of Canada.

“I am pleased to see the continuation of our academic renewal, supported by Provost Manfredi and McGill University,” said Dean Robert Leckey. “I look forward to seeing how these gifted and energetic scholars will contribute to our collective project of an integrated, deeply pluralist approach to legal teaching and research.”