The Sex vs. Gender (Identity) Debate In the United Kingdom and the Divorce of LGB from T 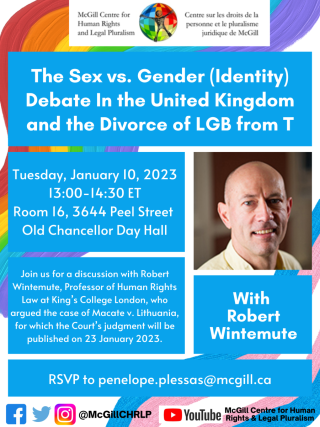 By Professor Wintemute: Since 2018, there has been a debate in the United Kingdom about whether or not the law should be changed to make it easier for a transgender individual to change their legal sex from their birth sex, and about exceptional situations, such as women-only spaces and sports, in which the individual’s birth sex should take priority over their gender identity, regardless of their legal sex. This debate inspired the foundation in 2019 of an organisation, LGB Alliance, which rejects the political coalition of LGB and T and challenges some transgender demands, on the basis that they conflict with the rights of lesbian and bisexual women or the rights of children who might grow up to be LGB adults.

CHRLP note: the CHRLP invited Professor Wintemute to give this talk based on his record as a human rights and LGB scholar. We note that Professor Wintemute is also a trustee of the LGB Alliance. The CHRLP does not endorse the views of the Alliance or of any speaker. The CHRLP is committed to a respectful and inclusive space for debate.

Darren Rosenblum. Professor Darren Rosenblum’s scholarship focuses on corporate diversity, with emphasis on remedies for sex inequality. They joined the Faculty of Law of McGill University as a Full Professor in August 2021, from the Elisabeth Haub School of Law at Pace University. Among many other publications, they wrote the first law review article of queer legal theory “Queer Intersectionality” (1994) and the first law review article on transgender prisoners “Trapped in Sing Sing” (2000). They have taught Sexuality, Gender and the Law since 2003 at Fordham, McGill, NYU, Pace and U.Penn. They were appointed Associate Dean (Graduate Studies) in 2022.

Capacity is limited. Please RSVP to chrlp.law [at] mcgill.ca (closed as the room capacity has been reached)