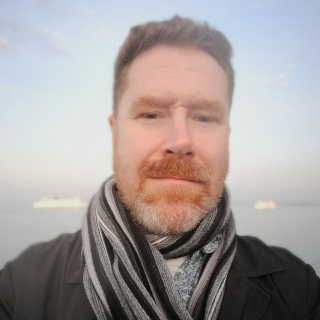 We are pleased to welcome Professor Nik Luka as Interim Director for the 2020–2021 school year. As an Associate Professor in the School of Urban Planning and the Peter Guo-hua Fu School of Architecture at McGill University, he has been involved with CIRM since its inception in 2014. Prof. Luka is also an associate member of the Bieler School of Environment, the Institute for Health and Social Policy, and the Trottier Institute for Sustainability in Engineering and Design.

Over the last 20 years, Nik Luka has been involved local communities of practice beyond the university. Notably, he was a member of the board of directors of the Montreal Urban Ecology Centre (one of our partners), which works to foster dynamic civil society through participatory urban design, planning, and governance initiatives. He developed numerous research partnerships with local organizations and actors, which represent unparalleled value for CIRM and will permit us to deepen our relationships with our 69 members. Based in the Faculty of Engineering, Prof. Luka will continue to anchor the Centre at the heart of the McGill community and to develop partnerships between complementary units and research groups.

Our community managers recently sat down with Prof. Luka to discuss his vision for CIRM, his new mandate, and of course, Montreal:

Why dedicate a research centre to the study of Montreal?

“Montreal is situated at the intersection of so many people, activities, and national and cultural projects, that it’s fascinating to observe. It’s worth bringing together people that are interested in understanding that. Universities are plentiful in Montreal, but they tend to be inward-facing fortresses, so it’s important to find ways to promote dialogue and interaction between these actors. Centres like CIRM are so important to build links with diverse sectors, our local communities, and within our social and cultural space.

Montreal also exists in various individual and cultural imaginaries — it’s rare to see the same fascination and mystique surrounding other cities. A very human desire is to be able to gather, to be together, without being preoccupied by appearance or status, and this is a dream that can be realized in Montreal. This dimension of Montreal’s identity is well recognized in English Canada. There’s the existing mythology, and it then becomes reality because Montreal’s inhabitants and institutions create this world, give themselves permission to bring it to life.”

What does the research-action mission of CIRM mean to you?

“It’s very important for a university to study its surroundings. Not everyone can or wants to do it, but this mission is crucial because it encourages and reinforces the possibility to connect, to engage, etc. It’s particularly important for McGill for two reasons. First of all, it’s a university with a ton of research activity. There is so much happening with different projects, so it’s crucial to have a nucleus to facilitate cross-pollination and collaboration between researchers. Second, there’s the stereotype that McGill University isn’t really connected to Montreal, isn’t really part of Quebec and operates on another planet. This can be explained by issues of language, politics, colonialism, and systemic racism. Evidently, we have work to do to catch up.

The fact that McGill’s main campus is so central suggests, even requires something like CIRM. Until now, McGill hasn’t really invested in its interactions with its [non-academic] surroundings. In my opinion, it must be a priority, even if the goal of a university is to gain perspective by retreating a bit from the goings-on of the world. It’s possible to do both. Today, it’s clear that universities must reinvent themselves, especially with the current changes and tumult of the pandemic, etc.”

How do you see your mandate for the coming year?

“One of the reasons I got involved in CIRM at the time of its inception was because community engagement is essential to me. We can’t do that without CIRM, which brings together people from various faculties and is very diverse [in terms of research topics and methodologies]. What interests me most is to go further with our community engagement processes and to understand how to talk about the coproduction of knowledge — what is Montreal? What can we do with something like Montreal? And to do it in a way that is sensitive and productive, and that will celebrate and embrace all the strengths and assets of this place.”

Do you think that CIRM’s new affiliation with the Faculty of Engineering will influence its priorities?

“I think it will [in the sense that the Faculty of Engineering is more focused on professional training, with disciplines more tied to action and intervention], but that’s not a goal in and of itself. […] The dean of my faculty is enthusiastic about the integration, processes, and activities of the Centre. There is an interest in solidarity and co-construction. In any case, it’s difficult to reorient the entire organization, to change the organizational chart of the university. We’ll certainly benefit from collaboration, in principle or in spirit, between the tendency to wisely pull back in order to look at the world critically, as in the arts and social sciences, and the tendency to act reflexively that is common to the world of engineering and professional schools like architecture and urban planning.”

As an expert in ethnography, urban planning, and architecture, how would you describe the city to non-Montrealers?

“I did this exercise in the context of a conference a few years ago! I was invited to name keywords to describe Montreal: hybridity, openness, a certain “laisser-aller”. The city has a relaxed mentality, in the sense that there is not bloody-mindedness. It’s a field of the most interesting and stimulating possibilities. Hybridity, in practice, means that diversity and difference are accepted — there is no preference, pretention, or a template that must be followed to be successful. At the same time, there are rigidities. Montreal is fundamentally about that tension between fluidity and rigidity. It’s a very interesting and accessible city, if one is ready to invest a little time and energy to integrate oneself.”

What do you want for Montreal?

“From the point of view of a specialist, in terms of management, governance, etc.: for Montreal to acquire a certain amount of autonomy as a level of government. I’m in agreement with Daniel Weinstock when he says that cities don’t really exist, in the system of the State. I want Montreal to have enough autonomy to be able to manage its future, as a region. I just hope for Montreal to have the liberty to follow its path.

If there was something to change at the heart of that, it would be to improve the ways in which we talk to each other, whether it be about governance or about issues like systemic racism. We have several resources for this; the public consultation office (OCPM) is unique worldwide. Having said that, public hearings are an extremely formal vehicle for these conversations. What can we do to augment and improve our ways of interacting and conversing? Civil society is abundant and thriving in Montreal, and it’s worth taking full advantage of that.”

Favourite districts: Mile-End, Lachine, Verdun, “wherever there are collisions, contradictions, where edge conditions are present and irregularities occur, hybridities, unused and under-used land — but where there is work to be done to counter the perverse effects of gentrification and the fetishization of all things urban for the purpose of consumption.”

Essential symbol: The geographic affiliation of the city and the way that “the man-made landscape is inextricable from geomorphological elements — the island, the river, the archipelago, the ever-moving river.”

In sum, Nik Luka is thrilled to assume the role of Interim Director. He salutes his predecessor, Pascal Brissette, and the entire CIRM team. “It’s a pleasure to be able to interact with everyone and to contribute to reinforcing the mission, the mandate, and the operations of the Centre,” he concludes.

We wish him a very warm welcome!