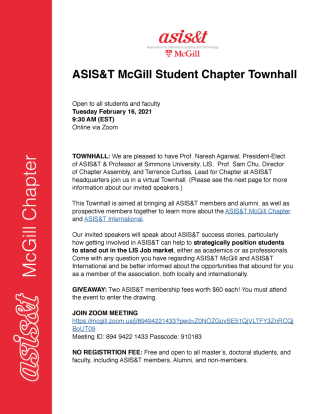 TOWNHALL: We are pleased to have Prof. Naresh Agarwal, President-Elect of ASIS&T & Professor at Simmons University, LIS, Prof. Sam Chu, Director of Chapter Assembly, and Terrence Curtiss, Lead for Chapter at ASIS&T headquarters join us in a virtual Townhall.

This Townhall is aimed at bringing all ASIS&T members and alumni, as well as prospective members together to learn more about the ASIS&T McGill Chapter and ASIS&T International. Our invited speakers will speak about ASIS&T success stories, particularly how getting involved in ASIS&T can help to strategically position students to stand out in the LIS Job market, either as academics or as professionals.  Come with any question you have regarding ASIS&T McGill and ASIS&T International and be better informed about the opportunities that abound for you
as a member of the association, both locally and internationally.

GIVEAWAY: Two ASIS&T membership fees worth $60 each! You must attend the event to enter the drawing.

NO REGISTRTION FEE: Free and open to all master’s, doctoral students, and faculty, including ASIS&T members, Alumni, and non-members.
Open to all students and faculty
Tuesday February 16, 2021
9:30 AM (EST)
Online via Zoom

Naresh Agarwal  Naresh Agarwal is an Associate Professor and Director of the Information Science & Technology Concentration at the School of Library & Information Science at Simmons University, Boston, Massachusetts, USA. He is currently the President-elect of ASIS&T. Naresh’s research area is information behavior and knowledge management. Before being elected President-elect, Naresh held various leadership positions in ASIS&T. Naresh joined ASIS&T as a student member in 2008. He was a member of its Board of Directors and Director of the Chapter Assembly (2012-2014). He organized the ASIS&T Annual Meeting in 2017 as Conference Co-Chair, and was the Poster Co-Chair of the 2020 Annual Meeting. He has led various SIGs over the years as Chair-elect and Chair – SIG Social Informatics, SIG Health, SIG ED (won SIG of the Year in 2012), and SIG KM. He was awarded the ASIS&T James M. Cretsos Leadership Award in 2012. Naresh was a member of the Strategic Planning Group and Chair of the Membership Committee. Naresh envisioned and initiated the South Asia Chapter of ASIS&T, and is currently Advisor to the Chapter. http://web.simmons.edu/~agarwal

Sam Chu Dr. Chu is an Associate Professor at the Faculty of Education, The University of Hong Kong (HKU). He was the Head of Division of Information and Technology Studies (2013-16). He has obtained 2 PhDs in Education – one focusing on e-Learning from University College London, Institute of Education and another one focusing on Information and Library Science from HKU. His areas of expertise include gamified learning, 21st Century Skills, and Social Media in Education. He has been involved in over 60 research projects with a total funding of US$ 9,375,918. He has published more than 390 articles and books, and appeared in over 90 international academic journals. This includes key journals in the area of e-Learning, information and library science, school/ academic librarianship and knowledge management. Furthermore, Dr. Chu is the Co-Founder and Co-Editor for the journal Information and Learning Sciences. He is also a Member of the Humanities and Social Sciences Panel of the Research Grants Council of HK and a Member of Curriculum Development Council Committee on Learning Resources & Support Services, Education Bureau. He has received many awards including the Faculty Outstanding Researcher Award in 2013, Faculty’s Knowledge Exchange Award in 2016 and Excellent Health Promotion Project Award from Food and Health Bureau in 2017. He is the world’s 66th highest contributor to publications in library and information science between 2007-12 and has achieved an h-index of 35 over the years. He has been a Consultant for UNESCO Bangkok, EDB, Oxford University Press, Pearson Education Asia, and is currently serving as the ASIS&T Director of Chapter Assembly (2020-2021). He is also an Advisor for EdTech startups at HK Science and Technology Parks and the Founding Chairman of Academy 22 Education for All Foundation.