Where does the colour go when I bleach my hair?

Jean Harlow, the original Blonde Bombshell, used to make her locks light with regular Clorox bleach, a fact which might just explain her mysterious death at age 26. When household bleach (sodium hypochlorite) reacts with ammonia, which is used in hair dye to help the dye molecules absorb into hair, it creates toxic chlorine gas.
Ada McVean B.Sc. | 1 Mar 2018
You Asked

Hair naturally gets its colour from a pigment molecule called melanin. There are 2 types of melanin: eumelanin, which gives hair and skin a brown or black hue, and pheomelanin, which gives the red hue. Different mixes of these two dyes are responsible for all the natural hair colours humans can have, and it’s these dyes that must be removed from hair in order to get blonde or white strands.

Bleaching by reduction is how bleaches like sodium hydrosulphite achieve their faded hues. They react with a chromophore (the part of a molecule that is colourful) and decrease the number of carbon-oxygen bonds in it, making it uncoloured.

Reducing bleaches probably aren’t what you or your hairdresser are using on your locks though. They’re mostly used for industrial purposes, like bleaching wood pulp to make white paper. The oxygen in the air is actually able to reverse bleaching-by-reduction to a certain extent. That’s why we see white paper turn yellow with age, because the chromophore is being changed back into its colourful form.

But my hair won’t turn yellow after after I bleach it, no matter how long I wait, and that’s because the bleaches used on hair are a bit different. For that, we typically use H2O2 or hydrogen peroxide.

H2O2 still chemically alters the chromophore, but instead of decreasing the number of carbon-oxygen bonds, it increases them. To reverse this and yellow my hair I’d have to expose it to a reducing agent, and they’re much less common than air. 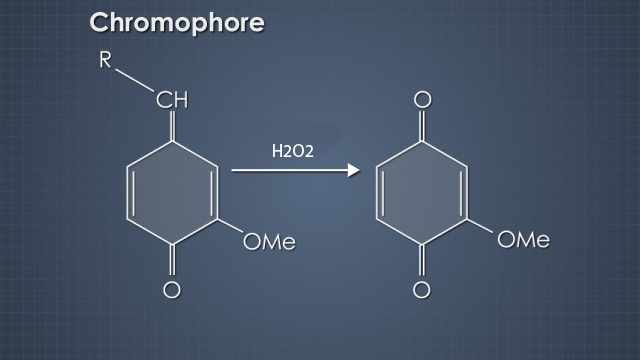 Household bleaches used for cleaning and disinfecting also work by oxidation, so why can’t we use those to create our blonde hair?
Well, people used to! Jean Harlow, the original Blonde Bombshell, used to make her locks light with regular Clorox bleach, a fact which might just explain her mysterious death at age 26. When household bleach (sodium hypochlorite) reacts with ammonia, which is used in hair dye to help the dye molecules absorb into hair, it creates chlorine gas. This gas  has been used as chemical weapon in World War I, the Iraq War and the Syrian Civil War, and is very toxic, even in small doses. Not exactly what I want to be filling my bathroom with.

So why does bleach damage our hair if it only reacts with pigment molecules? Well the oxidation reactions aren’t actually limited to pigment molecules, they’re just attacked first because they are numerous and accessible. So if you leave bleach on long enough, once the chromophores are all broken, the bleach will begin to react with the keratin that makes up your hair, causing split ends, damage and breakage.

Why is Pepto-Bismol pink?

How is IBU measured?

How does snake venom kill a human?

Cracking Your Knuckles Is Not as Bad as It Sounds