During our periods we often feel extra hungry, but is that hunger reflective of an actual need for increased calories, or just due to hormonal fluctuations?
Ada McVean B.Sc. | 7 May 2021

This article was first published in The Skeptical Inquirer

Shark week, moon time, the crimson tide, a visit from Auntie Flo: whatever you call it menstruation is the roughly monthly interval during which the uterus sheds its lining. For the uterus owner, it is not generally a super fun time; cramping, bloating, headaches, and fatigue are just a few of the symptoms associated with “that time of the month.”

The symptom I want to focus on today, though, is hunger. Whether for chocolate, pizza, or any food really, an increased hunger is a commonly reported phenomenon during, or right before, menstruation. Although we know that periodic (get it?) changes in appetite can be influenced by fluctuations in hormones such as estrogen and progesterone, I became curious whether this increase in hunger also correlated with an actual increased need for energy from food. Just like our bodies produce the sensation of thirst when they require more hydration, maybe they produce the sensation of hunger during menstruation in part because of an increased caloric need.

Luckily, science has a way to test that! Basal metabolic rate (BMR) is the amount of energy our bodies use when we are at rest. It can be measured in a variety of ways, but by far the most common is to measure the amount of oxygen a person inhales and/or the amount of carbon dioxide they exhale at rest. Putting this measurement into the Weir formula can then tell us how many kilocalories* per day our bodies burn at rest. If menstruation causes increased energy demands, that should be reflected in the BMRs of people during their periods.

*In case you didn’t know, the “calories” we commonly refer to, and see on food packaging, are actually kilocalories! Technically when “calorie” is written with an uppercase C, it means kilocalorie, and when written with a lowercase c, it means calorie. Basically: 1 Calorie = 1 kilocalorie = 1000 calories. But most of the time when people say calorie (regardless of capitalization), they really mean kilocalorie, a.k.a. the type of calories seen on food containers, so don’t let lowercase calories confuse you too much.

So, what do the BMR studies tell us about menstruation?

Tearing Down Is Always Easier than Building Up

It turns out that BMR in menstruating individuals actually starts decreasing during the bleeding portion of the cycle. It hits its lowest point approximately one week after menstruation begins and then steadily rises again until the start of the next period. The trend in BMR actually mimics this infographic of the endometrial lining very well. 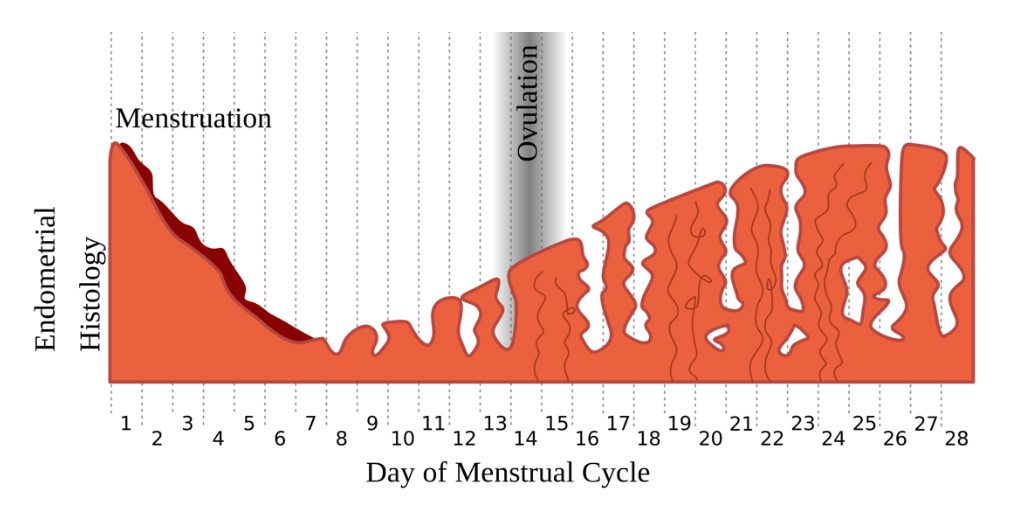 This finding makes sense, even if it’s not what I was expecting. While menstruating is, from the person bleeding’s point of view, the most taxing part of the menstrual cycle, to our bodies it’s the easiest. Think of it from a uterus’s perspective: It spends three weeks building up a uterine lining roughly 11 mm thick full of blood vessel and gland rich tissue, which is no small task. The week it spends expelling this lining is, by comparison, almost a vacation.

As far as our bodies are concerned, the energy-intensive portion of the menstrual cycle is days 8 to 28, when it is building literal flesh, not days 1 to 7 when that endometrial tissue is broken down and expelled.

That’s not to say that the uterus is idle during one’s period. Uterine contractions occur throughout all stages of the menstrual cycle but become especially strong during menses. Ostensibly these contractions help shed the uterine lining, although they also happen to feel rather painful.

The question remains then, if not due to a raised BMR, why do we experience increases in appetite just before, or during, our periods?

Blame It (Partially) on the Hormones

There is good evidence that progestogens, such as progesterone, can stimulate appetite. Levels of this sex hormone reach their peak about one week before menstruation begins, which can help explain pre-period munchies.

In a similar vein, while BMR decreases during menstruation, it rises to its maximum just prior to it. The variations in BMR during a menstrual cycle have been estimated by researchers as roughly 8 percent, or 164 Calories. That is roughly the amount of energy found in 1.5 navel oranges, or ¾ of a Kit-Kat bar. It’s not a huge amount, but it is big enough to impact your hunger leading up to and at the beginning of your period.

Still, we likely cannot blame our menstruation-related hungers completely on physiology. Food is comforting, and when you are feeling crampy or emotional, comfort foods are especially appealing. It doesn’t hurt either that chocolates and sweets have come to be associated with menstruation, with marketing campaigns and depictions in the media reinforcing this link.

So, in the end, while we may feel hungry just before, or during, our periods for several societal, physiological, and psychological reasons, we do not need to consume more Calories. There is, however, a small increase in caloric demands during the two weeks leading up to menstruation, although it is small enough that it is likely met through normal fluctuations in our diets.

Please though, do not let this article dissuade you from eating your favorite foods on your period. Dealing with a uterus leaking blood is no fun at all, and you deserve a nice snack.

The Demonization of Dietary Oxalate Has Begun

The Allure of Allulose