Magic of the mind 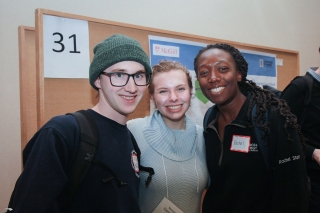 If you had told me five years ago that I would graduate college with a science degree, I would have said you were crazy. Sixteen-year-old Morgan thought science was dry textbooks and boring labs, too much work for things that would never affect her life. Until January 29th, 2017, when a serious knee injury forever transformed my relationship to science.

It wasn’t my doctor’s diagnosis or my physical therapist’s detailed explanation of the muscles in my leg that changed my perspective: it was the Scientific American magazines I read while waiting in the office that opened my eyes to a whole new world. For the first time, I was exposed to the awe of discovery, thrill of controversy, and thread of curiosity that ran through every scientific revelation. It dawned on me that the power of science lay not in memorizing equations, but in exploring unanswerable questions, enlarging human knowledge of what was real and what was possible. I didn’t learn this lesson from a worksheet or a quiz: I learned it through stories.

I want to create that same sense of scientific awe that Scientific American showed me, and I want to do it in a way that’s immersive, human, and accessible to everyone: first-person storytelling.

I decided to combine the most immersive genre I had ever experienced, fantasy, and my personal passion, cognitive science, to create my podcast, Magic of the Mind. My idea was to write cognitive science theories into the central plot points of each episode, so that the characters’ actions concretely demonstrated these theories.

To give you an idea of what this looks like, I’ll walk you through Episode 3: Alter Memory, which explores theories of (you guessed it!) memory. In Episode 3, my protagonist, Eve, is attacked by a monster who alters her memory to make her more vulnerable. In order to recover the true memory, Eve has to try to recreate as many factors as possible, which includes journeying back to her hometown where the memory was created. In doing this, Eve demonstrates the encoding specificity principle, which states that a memory will be easier to remember when the context in which it is recalled is more similar to the context of when the memory was created.

Co-released with each fantasy episode is an interview with a female researcher who has expertise in the respective topic. In episode 3, Dr. Signy Sheldon explains each key theory of memory written into the episode, including the role sleep plays in memory consolidation, the mechanism of traumatic memories, and the constant reconstruction of our memories. One of the primary goals of these interviews is to display the human voices of science. My hope is to expose listeners to a side of science that is human and full of trial-and-error, not the immutable encyclopedia of knowledge taught in so many classrooms.

Through my show, I hope people are able to learn about their minds, and by extension, themselves. I also hope that my show can start to shift the perspective of what science, science education, and science communication can look like. This is especially important looking forward. On a grand scale, the biggest threats of the future can only be solved by people who understand science. We live in a world that demands scientific and technical expertise, and this has never been more obvious than in the current COVID crisis.

It’s especially important to me that people who have historically been left out of scientific narratives (notably, women and people of color) are included. We need to inform and educate people in every corner of the world, and a jargon-filled, data-centric approach just isn’t accessible. Incorporating stories, even fantastic fictional stories, into science education and communication is one way we can move toward building a scientifically literate society. It’s hard to make big predictions, because a story’s impact is hard to measure, but I can tell you this: if sixteen-year-old Morgan had read more stories where her favourite characters were female scientists that widened her understanding of the world, she would have been a lot more enthusiastic about 21-year-old Morgan graduating with a science degree.

You can listen to Magic of the Mind on Apple Podcasts, Spotify, Google Play, or wherever you get your podcasts.

Photo: Morgan Sweeney (centre) was a presenter at the 2020 Academia Week Undergraduate Poster Showcase. Take a look at her poster on Magic of the Mind.  Photo credit: Janani Ramamurthy.