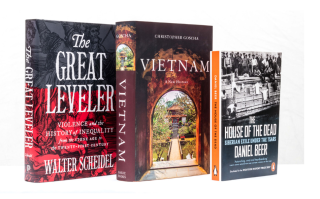 Run by McGill University, the Cundill History Prize rewards the best history writing in English. The jury of world-class historians and authors has chosen the finalists from a longlist spanning the globe and covering issues ranging from religion to race relations. The winner will be awarded US$75,000; the two runners-up receive US$10,000 each.

The House of the Dead: Siberian Exile Under the Tsar by Daniel Beer (Allen Lane)

The Great Leveler: Violence and the History of Inequality from the Stone Age to the Twenty-First Century by Walter Scheidel (Princeton University Press)

Margaret MacMillan, Chair of the Jury, said: “The three finalists for the 2017 Cundill History Prize are extraordinary works of history: beautifully crafted, well-researched, and ambitious. They tackle big issues and help us to know ourselves and our world better. We live in complicated times and the work of historians such as these provides us with the necessary background, understanding and insights to enable us to formulate the sorts of questions we ought to be asking.”

With Vietnam: A New History, Christopher Goscha, a professor at the Université du Québec à Montréal (UQAM), has written the definitive history of an increasingly influential nation that most have only ever seen through the prism of colonialism and the Vietnam war.

Roy Foster said: “Christopher Goscha’s Vietnam was a revelation to me. This is a book that is written from an inside perspective, from somebody who has immersed himself in the sources, learned the languages, studied the cultures and constructed the story of a country, the story of individuals and people, often tragically, often inspiringly.”

“A vigorous, eye-opening account of a country of great importance to the world, past and future.” Kirkus Reviews

The Great Leveler turns Thomas Piketty on its head: the Austrian-born, US-based historian Walter Scheidel uses a sweeping look at history, from the Stone Age to the 21st century, to demonstrate why inequality is so persistent — and unlikely to go away.

Jeffrey Simpson said: “If you are someone who wants more equality in your society, you’re going to hate this book. Walter Scheidel has backed up a very controversial thesis with an enormous amount of economic data. The Great Leveler is going to be quite unpopular in certain circles, but it is a book that we think you have to grapple with, even if you don’t agree.”

“A scholarly and ambitious book.” Paul Mason, the Guardian

The British historian Daniel Beer delivers a ground-breaking new study of how the Tsars turned Siberia into a vast and brutal prison camp.

Amanda Foreman said: “The House of the Dead is absolutely marvellous, because it presents a 360° view of history. Daniel Beer has a universality of approach that is both innovative and really important. This is the story of an immense tragedy over hundreds of years. It is a huge canvas, and to be able to bring in individual stories, that sense of what it is to be human, is really a triumph.”

Commenting on the shortlist, Rana Mitter said: “One of the things that is most notable about this shortlist is how extensive, how global the questions that it deals with are. These studies speak to something even beyond the particular subjects that they look at.”

“It is hard to imagine the hell of Siberia’s penal colonies under the Tsars. This history paints a vivid and grisly picture… An absolutely fascinating book, rich in fact and anecdote.” David Aaronovitch, The Times

The Canadian historian Margaret MacMillan, the British-American historian and author Amanda Foreman, the award-winning Oxford Professor Roy Foster, the UK historian and broadcaster Rana Mitter, and the decorated Canadian journalist and author Jeffrey Simpson are judging the Cundill History Prize in its 10th anniversary year. They chose this year’s contenders from a record 300 submissions.

All three authors will attend the Cundill History Prize Gala in Montreal on November 16, where the winner will be announced.

Keep up to date with the award and join the conversation via:

The Cundill History Prize recognizes and rewards the best history writing in English. A prize of US$75,000 is awarded annually to the book that embodies historical scholarship, originality, literary quality and broad appeal. The two runners-up each receive US$10,000. The Cundill History Prize is administered by McGill University in Montreal and awarded by five distinguished jurors. It honours the abiding passion for history of its founder, F. Peter Cundill, by encouraging informed public debate through the wider dissemination of history writing to new audiences around the world. The 2017 longlist comprised:

Blood in the Water: The Attica Prison Uprising of 1971 and its Legacy by Heather Thompson (Pantheon Books)

The Evangelicals: The Struggle to Shape America by Frances FitzGerald (Simon & Schuster US)

The House of the Dead: Siberian Exile Under the Tsar by Daniel Beer (Allen Lane)

The Islamic Enlightenment: The Struggle Between Faith and Reason, 1798 to Modern Times by Christopher de Bellaigue

Russia in Revolution: An Empire in Crisis, 1890 to 1928 by Stephen Smith (Oxford University Press)

The Great Leveler: Violence and the History of Inequality from the Stone Age to the Twenty-First Century by Walter Scheidel (Princeton University Press)

F. Peter Cundill (1938-2011), a distinguished alumnus of McGill University, was a philanthropist, sportsman, diarist, and renowned global investor. A voracious reader and inveterate traveller, F. Peter Cundill had an abiding passion for history: he believed that it was possible to comprehend the present and arrive at a measured perspective about the future only by first understanding the past. This led him to found the Cundill History Prize. The Cundill Foundation continues to support charities, research projects, and educational and enterprise gifts to young people.