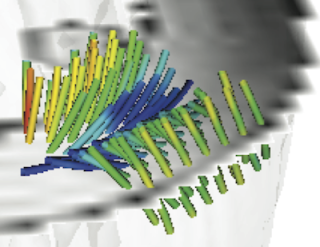 Discovery could be used to help engineer artificial tissue

A study led by researchers from McGill University provides new insights into the structure of muscle tissue in the heart - a finding that promises to contribute to the study of heart diseases and to the engineering of artificial heart tissue.

The research, published in the Proceedings of the National Academy of Sciences (PNAS), reveals that the muscle fibres in the heart wall are locally arranged in a special "minimal surface," called the generalized helicoid. The results add a significant new dimension to our understanding of the structure and function of heart-wall muscle fibre since minimal surfaces arise in nature as optimal solutions to physical problems. (A more familiar example of a minimal surface is the film that forms when a wireframe is dipped in a solution of soap.)

Surgeons and anatomists have been examining the geometry of muscle fibres in the heart for decades, and have long known that muscle cells are aligned to form helices that wind around the ventricles. But these analyses have been confined largely to the level of individual fibres. Partly because of the limitations of traditional histology techniques, little work has been done on the more-complex geometry of groups of fibres.

Working with collaborators at Eindhoven University of Technology in the Netherlands, and Yale University in the U.S., the McGill-led team used a combination of Diffusion Magnetic Resonance Imaging (dMRI) and computer modeling to reveal the way that bundles of fibres bend together. The researchers examined images of the heart tissue of rats, humans and dogs - and found the same pattern.

"You can think of it as analyzing a clump of hair instead of an individual hair strand," explains Professor Kaleem Siddiqi of McGill's School of Computer Science.  "We've discovered that the clump bends and twists in the form of a particular minimal surface - the generalized helicoid - and this is true across species.  It's not particular to just one mammal.  The implications of these findings are broad."

The knowledge could be used, for example, to provide a scaffold to guide the repair of heart-wall damage caused by heart attacks.  While regeneration of muscle tissue is a major area in bioengineering, most developments in this field have involved skeletal muscle tissue - such as that in arms and legs - which is arranged in a different, more linear structure.

The first author of the study is Dr. Peter Savadjiev of Harvard Medical School, whose research on this problem began while he was a doctoral student of Prof. Siddiqi's at McGill. Other co-authors of the paper are Gustav J. Strijkers and Adrianus J. Bakermans of Eindhoven University, Emmanuel Piuze of McGill, and Steven W. Zucker of Yale University.

Image: Fibres in the heart wall of a rat