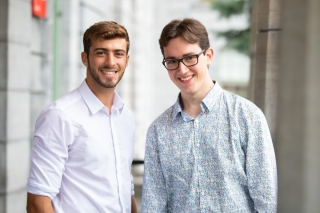 Out of a pool of more than 300,000 potential candidates across Canada, 1,400 students were nominated, of whom 50 received this celebrated award.

Cyril Mani, 19, received the $100,000 Schulich Leader Scholarship. A graduate of Collège Jean-de-Brébeuf in Montreal, Mani will be entering the department of Mechanical Engineering in McGill’s Faculty of Engineering this fall. Mani was selected for his outstanding academic record highlighted by honours including the Bourse de l'Avenir from the Fondation de l'Ordre des ingénieurs du Québec and a Canadian Association of Physicists award. Mani is also one of the founders of Micreau, an organization of student ambassadors leading interactive workshops at elementary and high schools, aimed at educating students about global issues and practical skills such as autonomy, self-management and critical thinking.

“Attending McGill for me is all about the people that make it unique,” says Mani. “Being in a university that encourages its faculties to interact as McGill does is very important since I want to experience different ways of thinking and diverse points of view.”

Marin Schultz, 18, is a recipient of the $80,000 Schulich Leader Scholarship. A graduate of School of Hope in Vermilion, Alberta, Schultz will be entering the Physical, Earth, Math & Computer Science group in McGill’s Faculty of Science this fall. In addition to a consistent record of academic excellence, Schultz has been active in the area of low-cost, 3D-printed limb prostheses and robotic control system designs, research which has earned him numerous awards and honours, including the 2019 Regeneron Science Talent Search Scholar award from one of the oldest and most prestigious science and math competitions in North America.

“I plan to study theoretical physics and nanoscience,” says Schultz. “I hope to play a role in pushing the boundaries of knowledge and find ways to help people through advancements in these areas of discovery.”

The selection of Mani and Schultz brings to 16 the number of Schulich Leader Scholarships awarded to incoming McGill students since the program’s inception in 2012.

“Schulich Leader Scholarships are the largest STEM scholarships in Canada. With 50 outstanding students selected in Canada each year it is all but guaranteed that this group represents the best and brightest Canada has to offer. These students will make great contributions to society, both on a national and global scale. With their university expenses covered, they can focus their time on their studies, research projects, extracurriculars, and entrepreneurial ventures. They are the next generation of technology innovators,” says program founder Seymour Schulich.

Schulich Leader Scholarships are prestigious entrance scholarships awarded to 50 high school graduates enrolling in a Science, Technology, Engineering or Mathematics (STEM) undergraduate program at 20 partner universities in Canada. Each year, every high school in Canada can submit one Schulich Leader Nominee based on academic excellence in STEM, entrepreneurial leadership and financial need.

Recognizing the increasing importance and impact that STEM disciplines will have on the prosperity of future generations, businessman and philanthropist Seymour Schulich established this $100 million scholarship fund in 2012 to encourage our best and brightest students to become the next pioneers of global scientific research and innovation.