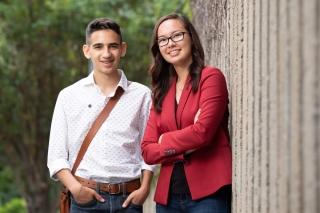 Miasya Bulger and Raphael Hotter have been named McGill’s recipients of the prestigious Schulich Leaders Scholarship.

This year, out of a pool of 350,000 potential candidates across Canada, 1,400 students were nominated, of which 50 received this celebrated award.

Miasya Bulger, 18, is a recipient of the $100,000 Schulich Leader Scholarship. A graduate of Lisgar Collegiate Institute in Ottawa, Bulger will be entering the Department of Bioengineering in McGill’s Faculty of Engineering this fall. Bulger was selected for her outstanding academic record combined with her community leadership in mentoring STEM students, working with youth through the Royal Canadian Army Cadet program, and implementing programs for youth at the Ottawa Public Library. In addition, Bulger has focused her efforts on initiatives to alleviate child poverty in Ottawa by organizing awareness workshops for students and fundraising drives for food banks and local charities.

“This scholarship provides me with the resources to pursue my dream program of study and also represents the next step when it comes to changing the conversation regarding women in STEM fields,” says Bulger. “I hope to become a role model for young girls who often look to mentors when envisioning themselves in a future career.”

Raphael Hotter, 18, is a recipient of the $80,000 Schulich Leader Scholarship. A graduate of Marianopolis College and Herzliah High School in Montreal, Hotter will be entering the Physical, Earth, Math & Computer Science group in McGill’s Faculty of Science this fall. Hotter was selected for his excellence in academic achievement and his efforts as co-founder of a school computer science club and hackathon. In addition, his longstanding research interests led to an award-winning science fair project which proposed a new drug to treat the Ebola virus (which he pursued with the guidance of McGill researchers) and, most recently, a new way to image the vascular architecture of the brain, which earned second place at the Intel International Science and Engineering Fair.

“It’s a great honour to attend McGill,” says Hotter. “I’m most looking forward to the multicultural environment and getting to know people from around the world.”

“Schulich Leader Scholarships are the largest STEM scholarships in Canada. With 50 outstanding students selected each year from across Canada, this group represents the best and brightest Canada has to offer,” says program founder Seymour Schulich. “These students will make great contributions to society, both on a national and global scale. With their university expenses covered, they can focus their time on their studies, research projects, extracurricular, and entrepreneurial ventures. They are the next generation of technology innovators.”

Schulich Leader Scholarships are prestigious entrance scholarships awarded to 50 high school graduates enrolling in a Science, Technology, Engineering or Mathematics (STEM) undergraduate program at 20 partner universities in Canada. Each year, every high school in Canada can submit one Schulich Leader Nominee based on academic excellence in STEM, entrepreneurial leadership and financial need.

Recognizing the increasing importance and impact that STEM disciplines will have on the prosperity of future generations, businessman and philanthropist Seymour Schulich established this $100 million scholarship fund in 2012 to encourage our best and brightest students to become the next pioneers of global scientific research and innovation.