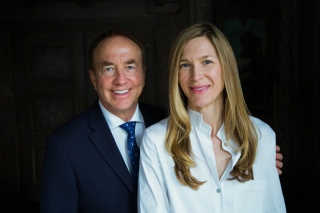 Today, John and Marcy McCall MacBain announced the creation of the McCall MacBain Scholarships at McGill through a landmark gift of $200 million (Canadian), the single-largest gift in Canadian history.

The McCall MacBain Scholarships at McGill will provide outstanding students from Canada and internationally with the opportunity to pursue a master’s or professional degree, combined with a world-class enrichment program.

In addition to full funding to cover tuition and fees plus a living stipend, scholars will benefit from mentorship and immersive learning experiences including retreats, workshops and internships. It will be the most generous and comprehensive graduate scholarship to exist at this level in Canada.

In initiating this gift in honour of McGill’s bicentennial, the McCall MacBains and their Foundation recognize an important gap in the Canadian higher education landscape: that there is currently no comprehensive, leadership-driven scholarship in the country for master’s and professional degree students. As a result, the McCall MacBain Scholarships will invest in students who are developing expertise in their respective fields and have a track record of collaborating with others to understand and address important problems and challenges. By creating Canada’s first comprehensive scholarship at this level – one that builds on but is not limited to academic excellence – John and Marcy McCall MacBain hope to bring together a resilient community of students dedicated to solving pressing global issues and complex problems, to ultimately improve the lives of others.

“As graduates of Canada’s publicly-funded university system, Marcy and I know first-hand how universities like McGill can reduce social barriers and foster talent at the highest of levels,” said Mr. McCall MacBain. “I received my undergraduate degree as a scholarship student from McGill and it truly changed my trajectory. We are confident that with its combination of academic excellence and global reach, McGill is the institution where even more exceptional students can realize the aspirations they have for themselves and the welfare of others.”

“We are incredibly grateful to John and Marcy McCall MacBain for their visionary support of McGill’s students,” said Suzanne Fortier, McGill’s Principal and Vice-Chancellor. “As McGill prepares to celebrate its Bicentennial in 2021, the McCall MacBain Scholarships embody our vision for McGill’s third century: a place where students become future-ready and prepared to contribute to shaping our rapidly changing world.”

Applications will open in the fall of 2020 to students from across Canada for the inaugural class. McCall MacBain Scholars will begin their studies at McGill in the fall of 2021. The Scholarships will be expanded to include international students in the third year of operation. Within five years, the Scholarships will grow to support up to 75 scholars on campus. McCall MacBain Scholars will be able to choose among existing master’s and professional degrees such as Law and Medicine, as well as McGill's newly-created interdisciplinary Master of Arts and Science, which is under development and is expected to be inaugurated to coincide with the inaugural class.

Scholars will be selected for a combination of civic engagement, intellectual curiosity, entrepreneurial spirit, academic excellence, and exceptional character. Understanding that students with these qualities exist all over the country and the world, McCall MacBain Scholars will represent a diversity of backgrounds and bring a broad range of academic interests, cultural and geographic experiences, and a strong spirit of collaboration and deep interest in learning from others. Planned to continue in perpetuity, the McCall MacBain Scholarships will, over many decades, create a global community of innovators, creative leaders, academics, entrepreneurs and others with a lifelong commitment to improving the circumstances of those around them and working with others to make real change.

“As we develop these scholarships and support our scholars, we are looking forward to welcoming promising leaders with entrepreneurial spirit, who foster opportunities not only for themselves – but for those living in the world around them,” said Dr. Marcy McCall MacBain.

Franca Gucciardi, CEO of the McCall MacBain Foundation said, “We are planning to work hard to set up selection committees in Canada and then around the world to find and select the best future leaders to become McCall MacBain Scholars.”

“This is an extraordinary day for McGill, and we could not be prouder that John is our alumnus,” said Michael Meighen, McGill’s Chancellor. “We are grateful and honoured that John and Marcy have selected McGill as the home for this unique scholarship. With this gift, the largest philanthropic gift ever in Canada, they have cemented their place in modern history as great educational visionaries and philanthropists. They are the ideal embodiment of McGill’s aspirations and values.”

Originally from Niagara Falls, Ontario, John McCall MacBain came to McGill to study Economics, graduating with an Honours Bachelor of Arts degree in 1980. During his time at McGill, he was deeply involved in student life, including serving as President of the Students Society of McGill University. In his final year, he was named Valedictorian. Mr. McCall MacBain subsequently obtained a law degree from University of Oxford as a Rhodes Scholar, followed by an MBA from Harvard Business School, before launching a successful entrepreneurial career.

Mr. McCall MacBain has been active in many other philanthropic activities, including serving as Chair of the McGill Principal’s International Advisory Board, and as a Trustee of the Mandela Rhodes Foundation in Cape Town. Mr. McCall MacBain is a Trustee Emeritus of the Rhodes Trust in Oxford, a Foundation Fellow of Wadham College at the University of Oxford and is the Founding Chair of the European Climate Foundation. For his achievements as a business leader and for his contributions to academic institutions as a philanthropist, Mr. McCall MacBain was appointed as an Officer of the Order of Canada in 2016. He is also the recipient of several honorary degrees including an honorary doctorate from McGill.

Dr. Marcy McCall MacBain is originally from Huron County, Ontario, and obtained an Honours Bachelor of Kinesiology from McMaster University in 2000. She then completed a Master of Science in International Health Policy at the London School of Economics and Political Science and a DPhil in Evidence-Based Health Care at the University of Oxford. In her current role as an academic, Dr. McCall MacBain encourages the uptake of evidence-based practice through research and teaching initiatives with the Department of Primary Care Health Sciences and the Centre of Evidence-Based Medicine at the University of Oxford. Dr. McCall MacBain is a recipient of the Bynum Tudor Fellowship at Kellogg College Oxford and a McMaster Alumni Gallery Award recipient. Marcy is also a board member of B2Ten, the Canadian-based organization that supports Olympic athletes. She holds an honorary doctorate from Monash University.

John and Marcy McCall MacBain and their Foundation have been longtime supporters of McGill, and deeply influential patrons of higher education around the world. In 2013, they were lead donors to McGill’s History in the Making Campaign, establishing the McCall MacBain Fellowships in the Faculty of Arts. They have also given generously to the Mandela Rhodes Scholarships in South Africa, the Kupe Leadership Scholarships at the University of Auckland, the Loran Scholars Foundation in Canada, and to other educational causes, as well as supporting projects in health, climate change and environment. In 2013, the McCall MacBain Foundation committed £75 million to the Rhodes Trust in Oxford to help fund the Rhodes Scholarships and to aid in the expansion of the scholarship program around the world.

About the McCall MacBain Scholarships: www.mccallmacbainscholars.org