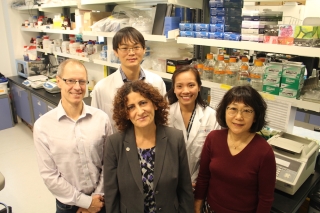 A team of scientists at the Research Institute of the McGill University Health Centre (RI-MUHC) and McGill University have identified three genes responsible for recurrent molar pregnancies, a rare complication that occurs when a non-viable pregnancy with no embryo implants in the uterus. The results of this study could have important implications, since until now very little is known about the genetic causes of all forms of fetal loss. Their study has recently been published in The American Journal of Human Genetics.

In Quebec, molar pregnancy occurs in about one in every 600 pregnancies, and half of these are characterized by a total absence of maternal chromosomes. Due to an imbalance in the number of chromosomes supplied from the mother and the father, the placental tissue grows abnormally and forms a tumour, leading to a malignant cancer in approximately 15 to 20 per cent of cases. Molar pregnancy is the most common form of all placental diseases (or trophoblastic diseases).

"Our findings add three new genes to the list of mutations leading to fetal loss and will allow for more DNA testing for patients in order to prevent the recurrence of molar pregnancies and provide better genetic counselling and management for couples," says lead study author Dr. Rima Slim, who is a researcher in the Child Health and Human Development (CHHD) Program at the RI-MUHC and an associate professor of Human Genetics and Obstetrics and Gynecology at McGill University.

However, clinicians and scientists still do not fully understand why a molar pregnancy occurs.

"Human pregnancies with no embryos have fascinated and puzzled scientists in all civilizations since the time of Hippocrates," says Dr. Slim, who has been working on molar pregnancies for more than 15 yeras. "Our findings uncover, for the first time, a mechanism for the genesis of this abnormality and link the causal factors involved in recurrent molar pregnancies, miscarriages, and male and female infertility to mutations in three genes."

In their new study, Dr. Slim and colleagues identified mutations in MEI1, TOP6BL/C11orf80, and REC114 in patients who had molar pregnancies without maternal chromosomes and recurrent miscarriages. They further investigated the impact of the Mei1 mutation in a mouse model to understand how the maternal chromosomes are lost.

The objective was to see whether Mei1-deficient mice produce oocytes (early eggs or ova) lacking maternal chromosomes, and to find out when and how these oocytes lose their chromosomes – questions that have remained unanswered since molar pregnancies were first described in 1977.

The researchers followed the development of oocytes from mice in which the Mei1 gene had been deleted. In some of these mice, the absence of the gene caused conceptions with an abnormal number of maternal chromosomes, and the conceptions did not survive implantation in the uterus, leading to infertility. In others, some oocytes lost all their chromosomes before fertilization and were empty; fertilization of these eggs was still possible.

Bringing together expertise in next-generation sequencing and mouse models

This discovery was made possible thanks to collaboration with Dr. Jacek Majewski's team at the McGill University and Génome Québec Innovation Centre, who oversaw sequencing of 68 patients and helped Dr. Slim’s team to identify three novel genes in eight patients. Research partners from the Registre des maladies trophoblastiques du Québec and from India, Turkey and the United States referred patients for the study.

"The mouse model was very important in producing new understanding of how these abnormal pregnancies occur without maternal chromosomes," says the study’s co-author Dr. Teruko Taketo, a researcher in the CHHD Program of the RI-MUHC, who enabled the team to look at the development of oocytes of Mei1-deficient mice as they matured in vitro.

A partnership to help patients

Since 2010, Professor Slim has been collaborating on the identification of genetic causes of molar pregnancies with Dr. Philipe Sauthier, gyneco-oncologist at the University Hospital of Montreal (CHUM), who founded the Quebec Trophoblastic Disease Network (RMTQ).

"The painful experience of a fetal loss associated with the discovery of an abnormal pregnancy is often destabilizing and stressful for women," says Magali Breguet, nurse coordinator of the RMTQ. "This collaboration is a positive step forward for women who must undergo several months of medical monitoring and also live with the anxiety that their next pregnancy may also be a molar pregnancy."

In 2006, Dr. Slim with her colleagues identified the first causative gene, NLRP7, for recurrent molar pregnancy. Thanks to their findings, laboratories all over the world are now able to provide testing for this gene in women who have experienced multiple molar pregnancies.

This work was supported by a grant from the Canadian Institute of Health Research (CIHR).

The Research Institute of the McGill University Health Centre (RI-MUHC) is a world-renowned biomedical and healthcare research centre. The Institute, which is affiliated with the Faculty of Medicine of McGill University, is the research arm of the McGill University Health Centre (MUHC) – an academic health centre located in Montreal, Canada, that has a mandate to focus on complex care within its community. The RI-MUHC supports over 420 researchers and close to 1,200 research trainees devoted to a broad spectrum of fundamental, clinical and health outcomes research at the Glen and the Montreal General Hospital sites of the MUHC. Its research facilities offer a dynamic multidisciplinary environment that fosters collaboration and leverages discovery aimed at improving the health of individual patients across their lifespan. The RI-MUHC is supported in part by the Fonds de recherche du Québec – Santé (FRQS). www.rimuhc.ca.