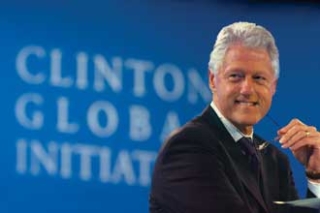 McGill University is proud to announce that it will award an honorary doctorate to President Bill Clinton, founder of the William J. Clinton Foundation and 42nd President of the United States of America, at a private honorary degree ceremony in Montreal on Friday, October 16.

"Few individuals define the expression global leader as perfectly as Bill Clinton," said Heather Munroe-Blum, Principal and Vice-Chancellor of McGill University. "During his presidency and in the years since, President Clinton has demonstrated an unyielding devotion to social justice in the world. His continued leadership inspires us all to do more, and we are honoured to have the opportunity to formally recognize his contributions."

William Jefferson Clinton was the first Democratic president in six decades to be elected twice - first in 1992 and then in 1996. Under his leadership, the country enjoyed the strongest economy in a generation and the longest economic expansion in U.S. history, including the creation of more than 22 million jobs.

After leaving the White House, President Clinton established the William J. Clinton Foundation with the mission to strengthen the capacity of people in the United States and throughout the world to meet the challenges of global interdependence.  Today the Foundation has more than 1,400 staff and volunteers around the world working to improve lives through several initiatives, including the Clinton HIV/AIDS Initiative, which is helping 2 million people living with HIV/AIDS access lifesaving drugs. Other initiatives -- including the Clinton Climate Initiative, the Clinton Hunter Development Initiative, and the Clinton Giustra Sustainable Growth Initiative -- are applying a business-oriented approach worldwide to fight climate change and develop sustainable economic growth in Africa and Latin America. As a project of the Foundation, the Clinton Global Initiative brings together global leaders to devise and implement innovative solutions to some of the world's most pressing issues. In the U.S., the Foundation is working to combat the alarming rise in childhood obesity, and is helping individuals and families succeed and small businesses grow.

In addition to his Foundation work, President Clinton has joined with former President George H.W. Bush three times - after the 2004 tsunami in South Asia, Hurricane Katrina in 2005, and Hurricane Ike in 2008 - to help raise money for recovery efforts. He also served as the U.N. Envoy for Tsunami Recovery to help people "build back better."

President Clinton was born on August 19, 1946, in Hope, Arkansas. He and his wife, Secretary of State Hillary Rodham Clinton, have one daughter, Chelsea, and live in Chappaqua, New York.

McGill University, founded in Montreal, Que., in 1821, is Canada's leading post-secondary institution. It has two campuses, 11 faculties, 10 professional schools, 300 programs of study and more than 34,000 students. McGill attracts students from more than 150 countries around the world. Almost half of McGill students claim a first language other than English - including 6,000 francophones - with more than 6,400 international students making up almost 20 per cent of the student body.