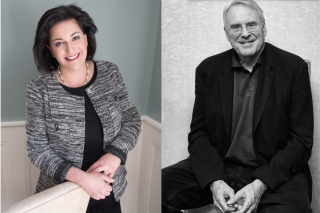 The two honorary doctorate recipients will address graduating students at the Nov. 26 ceremonies at the Salle Wilfrid-Pelletier, Place des Arts. In all, more than 1,640 students will be graduating this fall.

Azrieli, CEO and Chair of the Azrieli Foundation and Chair of Brain Canada, will receive a degree of Doctor of Laws, honoris causa at the morning ceremony. In a recent series of initiatives focused on altering the landscape in brain science and medicine, she has guided the Azrieli Foundation’s investments of over $200 million in academic, science and health organizations that provide innovative research, superior education and outstanding care.

At the afternoon session, Dryden will be awarded a degree of Doctor of Letters, honoris causa. Author, lawyer, politician, academic, sports executive, member of the Hockey Hall of Fame, and philanthropist, Dryden has established himself as a Canadian renaissance man. His latest book, Game Change, focuses on what he considers to be the most crucial issue facing athletes today: the devastating life-effects of brain injuries in sports.

“Our two honorary doctorate recipients have made exceptional contributions to society in a range of fields,” said Suzanne Fortier, Principal and Vice-Chancellor of McGill. “Their remarkable achievements, and their commitment to giving back, provide inspiring examples for our graduates as they set out on their own future paths.”

Naomi Azrieli
Azrieli is the CEO and Chair of the Azrieli Foundation, Chair of the Brain Canada Foundation, and President of Canpro Investments Ltd. and Omico Investments Ltd. Building on her background in business and academia, she has spent the last 15 years focused on strategic philanthropy, providing a model of what is possible when substantial resources are managed with business best-practices, bold vision and commitment. In a recent series of initiatives focused on altering the landscape in brain science and medicine, she guided the Azrieli Foundation’s investments of over $200 million in academic, science and health organizations that provide innovative research, superior education and outstanding care. Among these was a significant investment in the Montreal Neurological Institute.

Ken Dryden
The beloved goaltender of the Montreal Canadiens helped the team win six Stanley Cups and was awarded five Vezina Trophies as the league’s outstanding goaltender. His contributions to hockey extend beyond the ice to roles as team president, commentator, and best-selling author. Hockey was followed by a distinguished career in public service, initially as Ontario’s first Youth Commissioner and later as a Liberal Member of Parliament serving as Canada’s Minister of Social Development. A champion of youth literacy and education, Dryden established and is the principal funder of a post-secondary scholarship program that for 25 years has provided eight scholarships a year to improve access to higher learning for youth from foster homes and group homes. As an academic, he has taught at McGill’s Institute for the Study of Canada.