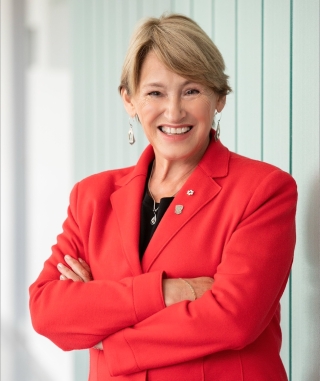 Professor Suzanne Fortier, Principal and Vice-Chancellor of McGill University, announced today that she will be stepping down from her second term on August 31, 2022.

“Entering the University’s third century provides a unique opportunity for renewal and for setting new directions and ambitious goals,” said Principal Fortier. “After close to a decade in this role, I believe it is an ideal time to pass the baton to a new leader who will shape the future of our University.”

Throughout her tenure, Principal Fortier’s leadership has been exemplary in times of both celebration and hardship, shaping the University’s international profile in the lead-up to its 2021 Bicentennial, and guiding the community through the unprecedented challenges of the COVID-19 pandemic.

“It has been and will continue to be an extraordinary privilege to serve my alma mater and its great community, and I will remain forever a loyal supporter of McGill.”

A distinguished scientist, teacher and academic leader, Professor Fortier began her tenure as the University’s 17thPrincipal and Vice-Chancellor in September 2013. She is a double graduate of McGill, where she received a BSc (1972) and a PhD in crystallography (1976).

In accordance with the Statutes of McGill University, an Advisory Committee will be formed to identify and recommend candidates for the role to the Board of Governors in the months ahead.

Celebrating 200 years of discovery and learning, McGill University ranks as one of the top universities in Canada and the world. McGill’s mission is to create and share knowledge by offering the best possible education, by carrying out research and scholarly activities judged to be excellent by the highest international standards, and by providing service to society. These activities span three campuses, 11 faculties, 13 professional schools, and some 300 programs of study. Every year, McGill welcomes over 40,000 students, attracting more than 30% from 150-plus countries, and has the highest percentage of PhD students of any Canadian research university. Nearly 60% of its student population speaks French.