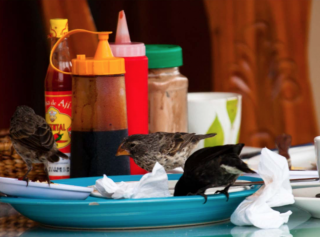 Rapid evolution of other species happens all around us all the time – and many of the most extreme examples are associated with human influences.

In a theme issue of the scientific journal Philosophical Transactions of the Royal Society B, researchers from McGill University have helped pull together the latest research on this phenomenon. The theme issue shows how humans affect the evolution of other species, and how those evolutionary changes can influence human societies. In many cases, these effects play out over only a few years to decades -- more quickly than biologists traditionally thought possible.

“Evolution is occurring all around us all the time, and it is influencing our environment, our health, and our overall well-being” says Andrew Hendry, professor in the Redpath Museum and Department of Biology at McGill University, and one of the editors of the theme issue.

Commercial fishing. When fishing pressure is high, the fish evolve to reproduce when they are younger and smaller, and thus tend to have fewer, smaller offspring. This evolutionary change can, in turn, reduce fisheries yields and the sustainability.

Urbanization. The development of cities dramatically changes many aspects of the environment and, hence, can instigate evolution in a variety of species. As examples, plants evolve decreased seed dispersal to compensate for the expansion of uninhabitable pavement, animals evolve resistance to industrial and residential chemicals, and bacteria evolve resistance to antibiotics.

The collection of studies in the theme issue provides a rallying point for broader discussions of how human influences shape evolution and how that evolution, in turn, influences species traits, biodiversity, and “ecosystem services” – the benefits that nature provides to humans, such as food, water and clean air.

“Evolution will fundamentally alter how species and ecosystems respond to environmental change,” Hendry says. “Evolution therefore needs to be an integral part of our assessments of biodiversity and ecosystem services.”

To read “Human influences on evolution, and the ecological and societal consequences” by Kiyoko M. Gotanda, Andrew P. Hendry, and Erik Svensson in Philosophical Transactions of the Royal Society B: doi.org/10.17863/CAM.6418

The research was funded by a Discovery Grant from the Natural Sciences and Engineering Research Council of Canada.