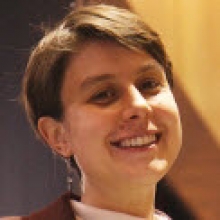 The research in my group is focused on the phenomena that occur at the interface between inorganic surfaces and biological molecules. We are currently developing three projects: bioactive scaffolds for bone and cartilage regeneration, synthesizing hydroxyapatite (HA) nanoparticles using oligopeptides as templants, and microspheres for oral drug delivery

Bioactive scaffolds are made of two components: a biodegradable polymeric matrix that creates a mechanical support for the implant, and bioactive glass particles, which induce the precipitation of a layer of HA on the implant’s surface. This layer is similar to the mineral phase of our bones, and therefore the scaffolds are easily integrated in the body, and stimulate the body’s own ability to regenerate itself. We use a combination of spectroscopic, microscopic and calorimetric techniques to gain a picture of the changes occurring at the interface between the scaffolds and body fluids. We will make a next generation of bioactive materials, and tackle fundamental issues such as what bioactivity really means, how we can simulate body fluids in-vitro, and how bones are formed.

Even though proteins are known to play an important role in biomineralization, it is still unclear which ones are involved in HA nucleation. We try to answer to this question by preparing oligopeptide arrays on surfaces, and test the formation of calcium-phosphate containing particles templated by these arrays. Our study will determine which aminoacids interact with HA precursors, how spacial constraints influence the peptides' ability to nucleate HA, and how HA morphology and crystallinity is modified by interactions with peptides.

Microspheres for oral delivery of calcitonin

Oral delivery of proteins is a very active area of commercial activity, which could result in eliminating the need for millions of injections per day currently required to deliver drugs such as insulin. However, oral delivery of proteins is technically challenging, because they are degraded as they pass through the stomach and gastrointestinal tract (GIT) and so may never reach the bloodstream. In this project we explore a method for delivery of calcitonin protected in porous microspheres made with a material that is long recognized as safe food additive. We will modify the surface of these spheres with molecules that will protect the spheres and their content in their passage through the stomach and GIT, and allow them to be adsorbed once they reach the upper tract of the GIT. We will explore calcitonin as model drug, currently used to treat diseases such as osteoporosis.