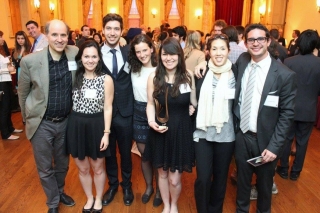 A group of McGill students and alums who worked on the Myko Social Score app have received the 2015 Catalyst Award for Excellence in Applied Student Research.

The Award is sponsored by the McGill Office of Sustainability and is decided by a distinguished jury. DCL candidate Juan Pinto, undergrad law student Etienne Ravilet Guzman, as well as alumni Carolina Cruz-Vinaccia (LLM’11) and Guillaume Béal (LLM’14), were among the members of the multidisciplinary team that received the group award.

Professor Richard Janda, who has led the project from its inception, describes Myko as a smart phone app that “lets you track your social and environmental sustainability, and then set concrete goals for yourself to improve our collective footprint. The project has been driven by McGill students and is a wonderful example of experiential learning.”

The annual Catalyst Awards event, which was held this year on April 13, acknowledges and celebrates those who have led the way towards integrating sustainability into McGill's academics, operations and culture.

The Myko Social Score project has also made it to the final round of the Dobson Cup Start-UP competition.

Myko can be downloaded for free at getmyko.com as an iPhone and web app.

Find out more information on the 2015 Annual Catalyst Awards.

For photos of the event, see the McGill University Office of Sustainability's Facebook album.