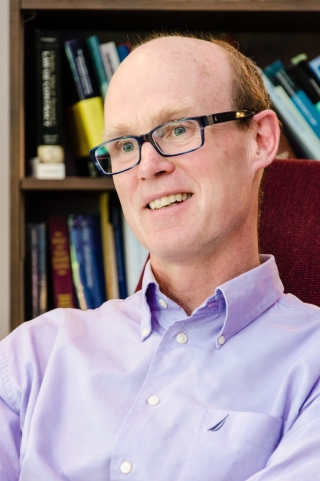 Professor Smith joined the Faculty of Law as an associate professor in 1998, being promoted to full professor in 2004 and named a James McGill Professor in 2009. He came to McGill following time as a tutor and then senior fellow in law at St Anne’s College, Oxford University. His doctoral studies at Balliol College had followed a BA in political science from Queen’s University and an LLB from the University of Toronto. In 1989, he clerked for Chief Justice Brian Dickson of the Supreme Court of Canada.

A prolific and respected scholar, he is the author of Contract Theory (2004), Atiyah’s Introduction to the Law of Contract, 6th ed (2005), Rights, Wrongs, and Injustices: The Structure of Remedial Law (2019), and many articles and chapters.

Professor Smith’s scholarly contributions were recognized by a Killam Fellowship from the Canada Council for the Arts (2008), appointment as a New Zealand Law Foundation Distinguished Fellow (2017), and his election as a fellow of the Royal Society of Canada (Academy of the Social Sciences) (2020). He also held visiting fellowships in Canada, the United States, Australia, and England.

At McGill, Professor Smith’s courses included Restitution, Remedies, and Legal Theory. Trained in the common law, he embraced the learning of the civil law and became a respected professor of Contractual Obligations and Extra-contractual Obligations (Torts), foundational courses in our integrated, double-degree program. It is proof of his curiosity and commitment to lifelong learning that, as a renowned scholar of contracts, he should exchange the main course in his doctrinal area for Torts. He told me that in Contracts the students’ questions were becoming familiar and that he was ready for a new challenge. We remember his intellectual contributions – many of us are better teachers and scholars for what he taught us – but we also remember much more.

Kind, gentle, thoughtful, and unassuming, Professor Smith was a wise and deeply collegial citizen of the Faculty of Law and the university. He spoke directly and honestly, exuding what one colleague characterized as his “trademark quiet confidence.” He served as associate dean (graduate studies and research) from 1999–2001 and chaired the Faculty of Law’s Space Committee for many years. All told, he oversaw the planning and execution of renovations to New Chancellor Day Hall’s first, third, fifth, and sixth floors. He brought to that task his expertise as a hands-on renovator and his acute reading of the McGill Law community’s needs and unwritten norms. He had a wonderful sense of humour. While committee work may not sound like a barrel of laughs, colleagues have told me that serving on one with him involved a lot of laughter. He cherished his colleagues and they cherished him.

Several colleagues took Professor Smith as exemplary in living and enjoying a balanced life, one marked by curiosity and intense engagement. He read fiction and nonfiction constantly. He loved good food and cooking. He generously recommended books and recipes. He was kind in everyday interactions and intellectual ones, framing his disagreements constructively in challenging conversations that he relished. Active as was his life of the mind, he joyed in physical activity, be it squash, yoga at the YMCA, biking, hiking, canoeing, kayaking, or cross-country skiing.

He was generous towards colleagues and friends who were less handy than he was, stepping in cheerfully with a hammer or other tools. Steve and Sue offered warm hospitality to many friends. They were anchors of their community of Montreal West, for example, volunteering to barbecue on Canada Day.

Professor Smith lived with illness for many years. It was only reluctantly that he took periods of leave, telling me that he felt better while he could keep working.

While those privileged to have been his colleague will remember many occasions with him, an especially memorable one was the daylong workshop devoted in January 2019 to his book manuscript. Steve wrote later to participants – some of whom had crossed the Atlantic to be there – to thank us for attending: “For me, the day was enormously stimulating, fun, and just generally memorable – and I hope, at least a little bit, for you as well.” He wrote that, while he had vigorously defended his ideas, he had reflected deeply on the comments and questions, benefiting much from them. By then years into heavy medical treatment, he counted himself fortunate to have spent a day debating his ideas with a group of people whom he respected and with whom he couldn’t wait to share a drink or meal afterwards.

Our thoughts are with Steve’s partner, Susan Law, and their children, Jamie, Michael, and Jennifer.

A celebration of Steve’s life will take place in the Faculty of Law, 3644 Peel Street, Montreal, on Friday 16 December at 2 p.m.

We invite you to send your thoughts and memories of Professor Smith to comms.law [at] mcgill.ca to be included in our virtual Guest Book.