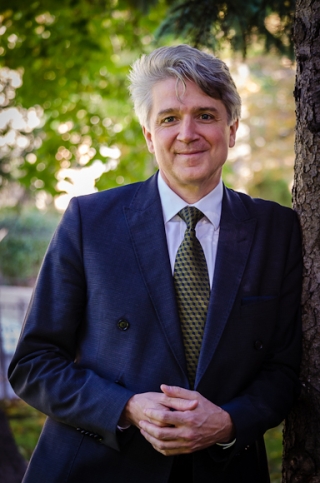 The Faculty of Law is pleased to announce that the Canadian Bar Association, Quebec Branch (CBA-Quebec), has awarded the Paul-André-Crépeau Medal for 2021 to Professor Fabien Gélinas, Ad E.

In its letter, CBA-Quebec president Horia Bundaru, BCL/LLB'05, praised Professor Gélinas’ remarkable contribution to the advancement of international aspects of private and commercial law in Quebec and abroad, highlighting his influence on the international arbitration scene, his research and teaching activities, his publications, and his commitment.

Professor Gélinas holds the Sir William C. Macdonald Chair and is a Norton Rose Fulbright Faculty Scholar in arbitration and commercial law. He heads the Private Justice and the Rule of Law Research group and is a cofounder of the Montreal Cyberjustice Laboratory. He was formerly general counsel of the International Court of Arbitration of the International Chamber of Commerce and president of the Arbitration Committee of ICC Canada and the Canadian Chamber of Commerce.

Professor Gélinas was awarded the Barreau du Québec's Advocatus Emeritus (Ad E) distinction in 2017. In February 2018, he was appointed to Canada’s Chapter 19 (Trade Remedies) NAFTA Roster for a ten-year mandate. In April 2020, he received a McGill COVID-19 Rapid Response grant for his research project titled The Covid-19 Crisis: An Investment Law Perspective. In June 2021, he received McGill’s David Thomson Award for Graduate Supervision and Teaching.

“This is a most well-deserved recognition of an exceptional colleague and jurist who, following in the path of our late colleague Paul-André Crépeau, has associated the name of McGill with significant contributions to private and commercial law internationally,” said Dean Robert Leckey, Ad E.

The Paul-André-Crépeau Medal is awarded each year by the Canadian Bar Association, Quebec Branch, to a Canadian jurist who has advanced the international aspects of private law and business law in in Quebec and elsewhere in Canada. Professor Gélinas is its 20th recipient, joining McGill Law colleagues Geneviève Saumier and Armand de Mestral, CM, as well as the late H. Patrick Glenn and Roderick Macdonald.