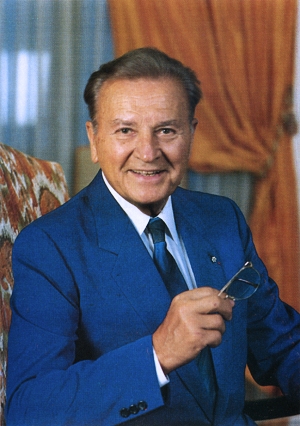 It is with regret that the Faculty of Law and the Institute of Air and Space Law must announce the passing of Dr. Nicolas Mateesco Matte, OC, QC, FRSC, CR, SRC, on April 13, 2016, at the age of 102. Throughout his distinguished academic career, Nicolas Mateesco Matte contributed to the development and better knowledge of international air and space law.

Born in Craiova, Romania, in 1913, Dr. Matte obtained his first doctorate of law from the University of Bucharest in 1939. After World War II, he moved to Paris, where he obtained a doctorate of international law from the Université de Paris. He moved to Canada in 1950, at a time when his scholarship in the field of air law had already made him a well-known proponent of a new international legal order, with a vision of national cooperation beyond political boundaries.

From 1951 to 1968, he was a professor and the inaugural holder of the Chair of Air Law, which later became the Chair of Air and Space Law, at the Université de Montréal, as well as a founder of the Club des relations internationales, to which many Canadian leaders belonged.

Dr. Matte’s long association with McGill’s Institute of Air and Space Law (IASL) began in 1961 when he was appointed visiting professor. In 1975, he was named Research Director of the IASL, and, in 1976, he was named its Director, at which time he founded the Annals of Air and Space Law, the Institute’s flagship publication. After a long and fruitful career at McGill, Dr. Matte retired from the Institute in on March 31, 1991, and was named Director Emeritus.

Dr. Matte wrote 18 books, most of them in French, collaborated on another 13 books, and published numerous learned articles in various journals.

In addition to his academic career, Dr. Matte contributed in the development of the city of Brossard, witnessed by a boulevard carrying his name. He was the ethnic groups’ commissioner in the Commission of Inquiry of the Position of the French Language and on Language Rights in Quebec in 1968. He was also one of the founders of the Cosmodôme science museum in Laval, which was inaugurated in 1994.

The prestigious awards Dr. Matte has received include the International Astronautical Federation's International Institute of Space Law’s Award (for his distinguished contribution to the law of outer space), ICAO’s Edward Warner Award (the equivalent of the Nobel Prize in Aviation), along with the Crystal Helmet Award, and the Order of Canada. He was also a Chevalier de l’Ordre du Québec, a Fellow of the Royal Society of Canada, a Commander of the National Order of Romania, and a Chevalier de la Légion d’honneur of France.

In lieu of flowers, the family invites that donations be made to the Nicolas Mateesco Matte Fellowship at McGill University's Faculty of Law (lauren.donnelly [at] mcgill.ca 514-398-2770) or to the Fondation Nicolas M. Matte at Université de Montréal's Faculty of Law (genevieve.cournoyer-proulx [at] umontreal.ca 514-343-7850).