New leadership at the helm of the IASL 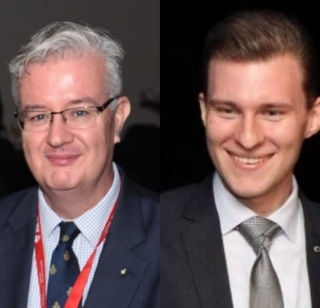 After a distinguished career in aircraft finance and leasing, Donal Hanley joined the IASL as an adjunct professor in 2019. He has been a prolific academic and regular attendee at conferences and events organized by the IASL. In 2022, he was appointed by the European Commission to its panel of arbitrators for bilateral trade disputes. He will be a member of the inaugural advisory board of The Hague Court of Arbitration for Aviation. Professor Hanley takes over the helm from Professor Ram Jakhu, who served as acting director for the past two years while Professor Brian Havel was on leave.

A doctoral student at the Institute of Air and Space Law and a graduate of its master’s degree program, Stefan-Michael Wedenig was the assistant editor of volumes 45 and 46 of the Annals of Air and Space Law. He served as a research assistant for the project to draft the McGill Manual on International Law Applicable to Military Uses of Outer Space. His doctoral research focuses on Space Law and Artificial Intelligence under the supervision of Professor Ram Jakhu. He takes over the executive director role from Kuan-Wei (David) Chen, who has served the IASL with dedication over the past ten years.

“I am pleased that our two colleagues, who are intimately familiar with our world-renowned Institute of Air and Space Law, were willing to take on these leadership roles and contribute to the IASL’s continued success,” said Dean Robert Leckey. “On behalf of our community, I also want to express my deep gratitude to Professor Jakhu, Professor Havel, and Kuan-Wei Chen for their dedicated leadership in service of the IASL’s mission.”