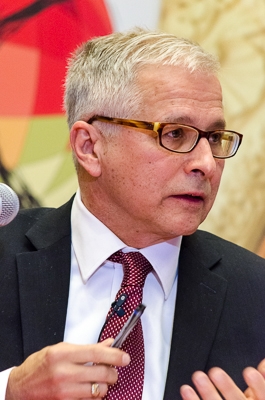 On March 18, 2014, the Centre for Human Rights and Legal Pluralism of McGill University was pleased to award Joseph Arvay, QC, the Robert S. Litvack Award for his exceptional public interest work and outstanding lifetime achievement.

Mr Arvay, who practices law in Vancouver, Canada, has argued numerous landmark cases involving civil liberties, human rights and constitutional rights. His work has covered a wide range of cases, from keeping safe injection sites open and decriminalizing assisted suicide, to protecting sex workers and arguing for gay and lesbian rights in the context of freedom of speech. Starting in 1983, Mr Arvay has been involved in no less than 53 Supreme Court of Canada decisions. Several of his cases were argued on a pro bono basis.

Mr Arvay gave an engaging lecture entitled “Litigating Charter Challenges: Stories of a Constitutional Lawyer,” providing an insight into the work and the deliberations that took place behind the scenes in several of his cases. The Faculty was also honoured that Mrs Sylvia Litvack, BCL’78, flew in from Europe to speak about the award and to present it to Mr. Arvay.

Mr Arvay’s lecture was recorded and can be viewed on McGill’s media servers.

The Award was created in 1987 to recognize the memory of Mr. Robert S. Litvack, BCL'63, a Montreal lawyer whose passionate commitment to the defense of the rule of law brought about landmark decisions in aboriginal and linguistic rights.