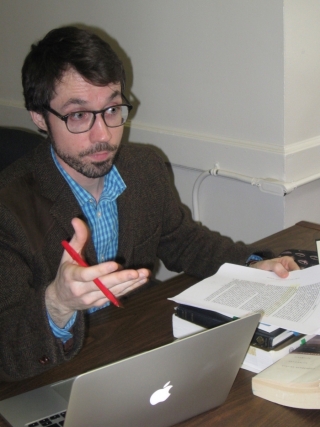 The Faculty of Law and McGill University’s Institute for Health and Social Policy (IHSP) are pleased to announce the joint appointment of Professor Jonas-Sébastien Beaudry, BCL/LLB’04, as Assistant Professor. Professor Beaudry will be joining McGill University in September 2018.

Currently an Assistant Professor at the Peter A. Allard School of Law, Beaudry specializes in human rights, legal theory, disability studies, and bioethics. He is also a member of the President’s Working Committee on Disability Culture, Art and Equity. Prior to joining UBC in 2015, Professor Beaudry was a postdoctoral fellow at the McGill Biomedical Ethics Unit, and was also a Boulton Fellow at Faculty of Law in 2013-2014.

After completing his BCL/LLB at McGill University’s Faculty of Law in 2004, Professor Beaudry went on to earn an LLM degree from Harvard Law School in 2007 and a DPhil in Law from Oxford University in 2014. He has clerked under Justice Marie Deschamps at the Supreme Court of Canada and served for a year at the International Court of Justice under Justice Sir Kenneth Keith and Justice Peter Tomka. He worked for 15 months in the Inter-American human rights system in Argentina and Costa Rica.

Professor Beaudry has been the recipient of numerous prestigious fellowships throughout his educational career, including both the Trudeau and SSHRC doctoral scholarships. He has also held a Lecturer position in law at the Université du Québec à Montréal, as well as teaching appointments at St. Catherine’s College, Oxford. His publications include a book on freedom of expression in Latin America and articles in a number of areas, including bioethics, human rights and disability studies. He is involved in policy consultations around disability issues.

"Because he bridges the normative and the empirical, and brings a strong policy orientation to his work, Jonas Beaudry is exactly the kind of researcher we need to build an innovative research and teaching agenda in disability studies," said IHSP Director Professor Daniel Weinstock.

“Dr. Beaudry brings exceptional talents as a scholar and will take up a leadership role in relation to disability studies at McGill,” added Dean Robert Leckey. “I am excited about the potential for his joint appointment to strengthen ties still further between the Faculty of Law and the Institute of Health and Social Policy.”