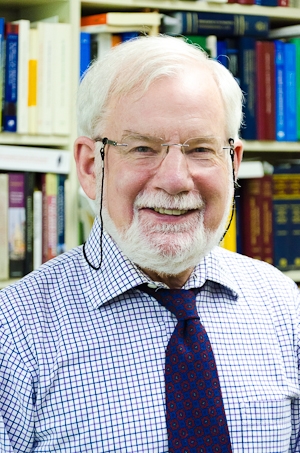 Professor H. Patrick Glenn was elected President of the American Society of Comparative Law, during the ASCL’s annual conference October 4 to 6, 2012.

The following day, when asked when he would begin his term, Glenn chuckled, “It’s started already! I spent the morning on practical business for the Association. We need to find an editor for the Journal, to start with.”

“This is wonderful news for our Faculty,” said Dean Daniel Jutras. “At every comparative law conference I have attended over the past decades, the first question I get from colleagues of other universities is "How is Patrick Glenn?". In the global comparative law community, Patrick is a household name, bringing honour to McGill.”

“This is an extraordinary accomplishment,” agrees colleague Rod Macdonald. “We have long known of his brilliant scholarship, and Europeans have appreciated his work within the Académie for decades.  It is wonderful that the American Society has joined the ranks of those organizations acknowledging his remarkable career.”

Professor Glenn holds the Peter M. Laing Chair at the McGill Faculty of Law. A former Director of the Institute of Comparative Law, he has been awarded the Grand Prize of the International Academy of Comparative Law for his authoritative tome, Legal Traditions of the World (Oxford UP, 2000), now in its fourth edition, as well as the prestigious Prix Léon-Gérin, attributed in 2006 by the Government of Québec in recognition of Glenn’s contribution to the field of comparative law.

He is the first Canadian, indeed the first non-U.S. national, to direct this leading comparative law organization.