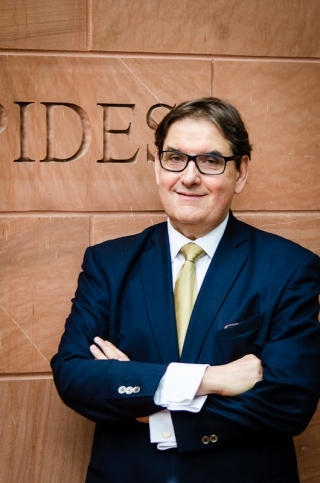 With sincere gratitude, the Faculty of Law is bidding farewell to Mtre Daniel Boyer, Ad. E., who is retiring from his role as Wainwright librarian and head law librarian. His last day will be 14 April 2022.

Daniel Boyer joined McGill University as Wainwright librarian in 1998, and has served three terms as head librarian for the Nahum Gelber Law Library. Under his leadership, the library’s holdings have supported and grown in tandem with the development of McGill Law’s distinctive integrated curriculum. When he was awarded the Advocatus Emeritus distinction in 2018, the Barreau du Québec highlighted that the Gelber Law Library “had an exemplary standing among comparative law libraries around the world.”

Holding degrees in law, history, and library sciences, Mtre Boyer has dedicated himself to sharing his knowledge and understanding of legal literature within McGill University as well as with the legal communities in Quebec, Canada, and abroad. In addition to publications and conference presentations on comparative law, he has acted as a consultant for law libraries, notably in Switzerland and Vietnam. He has been a longstanding jury member for the Walter Owen Book Prize of the Canadian Bar Association, and he was elected an associate member of the International Academy of Comparative Law in 2021. He has served at McGill as associate dean, user services, and he chaired the Library Search Committee as well as the Librarians’ Section of the McGill Association of University Teachers. He was promoted to full librarian in 2020. A staunch supporter of the McGill Law Journal and other student-run periodicals, he has been an engaged and supportive advisor for successive editions of the Canadian Guide to Uniform Legal Citation, better known as the McGill Cite Guide.

“Looking back, I am especially proud of the close collaboration and intellectual ties that were developed between the Gelber Law Library and the Faculty of Law through 24 years of engagement with professorial and student communities,” said Daniel Boyer. “My involvement in the significant changes that have occurred over the years has allowed me to learn about, and hold in high regard, the great personal and professional qualities of our community.”

“Having had the pleasure of working with Daniel over two decades – first in my student days, and more recently as a colleague – I am delighted to thank him on behalf of our entire community for his dedicated years of service and to wish him well in his next chapter,” said Dean Robert Leckey. “Under his watch, our library has been an extraordinary resource as well as a place for learning and intellectual debate cherished by our students, our professors, our alumni, and the legal community.”