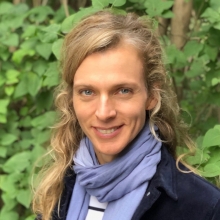 At the intersection of several contemporary critical streams, Stephanie Posthumus’s research focuses on the representations of the non-human, or more-than-human, in contemporary French literature as well as across European literatures and cultures.

Constructing an ecological perspective for examining 20th and 21st Century French literary texts has been the main goal of her work since she finished her doctoral thesis in 2003. As Prof.Posthumus argues, ecocriticism, while based on a concern for global environmental problems, is not transferable from one national literature to another. The traditions,philosophies, and representations of the non-human world that influence and are influenced by literature create important cultural differences that do not allow for a global ecocritical perspective. To build a French ecocriticism, she draws on ideas such asl’écosophie(Félix Guattari),la nature-culture(Bruno Latour), andle contrat naturel (Michel Serres). Her monograph, French Écocritique: Reading Contemporary French Theory and Fiction Ecologically (2017), as well as many of her articles demonstrate the use of French eco-theory to analyze questions of nature, environment, and landscapes in contemporary French novels.

A second branch of her work looks at representations of animals in contemporary French literature. Whereas ecocriticism has emerged more slowly in French literary studies, the animal question has garnered much critical attention in France. Researching different disciplinary work on animals, from philosophy (Jacques Derrida, Élisabeth de Fontenay, Dominique Lestel) to ethology (Boris Cyrulnik, Georges Chapouthier), from literary criticism (Lucile Desblache, Anne Simon) to animal ethics (Jean-Baptiste Jeangène Vilmer), Prof. Posthumus aims to define the animal question with respect to the French contemporary context. Her co-edited volume, French Thinking about Animals (2015) brings together leading animal studies scholars in the French-speaking world to discuss these questions. At the same time, she is interested in comparing the French context to that of other European countries. The relationships between local, regional, and cultural differences in a global landscape are at the heart of Prof. Posthumus’s work on ecocriticism and animal studies.

In addition, Prof. Posthumus has been leading a research project on the convergences of the digital and the environmental humanities. Awarded a SSHRC Connections grant in 2013, she brought together scholars interested in exploring the ways in which digital technologies can be used to disseminate cutting edge research in the environmental humanities. An integral part of the project, the Digital Environmental Humanities platform serves three main functions: 1) it acts as a hub for researchers in this emerging field; 2) it provides examples of analytic approaches such as topic modelling and mapping; and 3) it features pedagogical tools (DEH syllabi, guidebook blog entries) and digital exhibits of environmental humanities research in Canada. Working with digital texts and exploring new reading environments, Prof. Posthumus examines the philosophical assumptions upon which the human/machine binary has been built. In this way, she seeks to develop a post humanist approach to rethinking our relationship to animals, machines, and nature's others.
Selected publications: