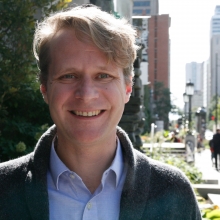 I work on Central and Eastern European culture, specifically Czech, Polish, Russian, Hungarian, and Austrian. I did my undergraduate education at Princeton University, spent two years in the Czech Republic, and then continued studying for my PhD at the University of Chicago. I am broadly interested in the intersection of literature, history, and philosophy. I have written on the meaning of history in Central Europe, dissident punk rock in Czechoslovakia, Venedikt Erofeev’sMoscow to the End of the Line,and the philosophical connections of Gilles Deleuze and Witold Gombrowicz, amongst other topics. I’m currently working on a book on non-narrative understandings of temporality, both on the level of the individual and on the level of the arc of history.