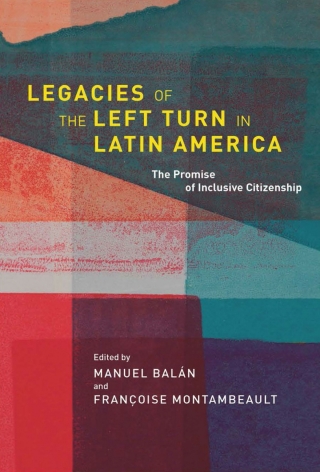 ISID is pleased to acknowledge the recent publication of Legacies of the Left Turn in Latin America:  the Promise of Inclusive Citizenship.  Co-edited by Professor Manuel Balán of ISID and Professor Françoise Montambeault of the Université de Montréal and published by the University of Notre-Dame Press, the book will have a formal local launch on February 21 at 4 pm at Bar A, 213, rue Rachel est.

Legacies of the Left Turn in Latin America: The Promise of Inclusive Citizenship contains original essays by a diverse group of leading and emerging scholars from North America, Europe, and Latin America. The book speaks to wide-ranging debates on democracy, the left, and citizenship in Latin America. What were the effects of a decade and a half of left and center-left governments? The central purpose of this book is to evaluate both the positive and negative effects of the Left turn on state-society relations and inclusion.

Promises of social inclusion and the expansion of citizenship rights were paramount to the center-left discourses upon the factions’ arrival to power in the late 1990s and early 2000s. This book is a first step in understanding to what extent these initial promises were or were not fulfilled, and why. In analyzing these issues, the authors demonstrate that these years yield both signs of progress in some areas and the deepening of historical problems in others. The contributors to this book reveal variation among and within countries, and across policy and issue areas such as democratic institution re- forms, human rights, minorities’ rights, environmental questions, and violence.