News flashes and past events

Thank you all for a successful event! Visit the conference page for the program and description. See also photographs that were taken at the conference (Credit: Ana Lucia Lobos). Corporate social responsibility: Due diligence and compliance with the OECD and UN principles The mechanics of third-party funding in international arbitration

Originally designed to support companies that did not have the means to pursue claims, the use of third-party funding has broadened; initially focused on investor-state arbitration, it is now spreading to commercial international arbitration.

Announcing the winners of the 2016 Nappert Prize in International Arbitration

The Fortier Chairs offers its warmest congratulations the four winners of the Nappert Prize!

The Nappert Symposium took place October 19, 2016, during which the winners of the 2016 Nappert Prize in International Arbitration presented their papers. TPP's investment chapter pursues a reform path within the existing international investment regime that many other states, including the United States, support. It is one path that might lead to a new gold standard, but it is not the only way to get there, and indeed what one considers a "gold standard" could change. Keep reading...

Does the Investor-State Dispute System in the Canada-EU Trade Agreement Make Sense? 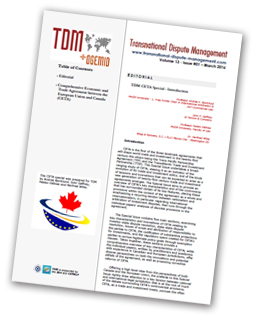 "...This Special Issue undertakes a broad-ranging study of CETA, viewing it as an indicator of the evolution of EU trade and investment policy, and of the kinds of tensions and innovations that can be expected to arise as a new generation of twenty-first century trade and investment agreements emerges. The Special Issue aims to provide an overview of CETA's key characteristics and of the controversy that has surrounded certain of its key features, placing these provisions within the context of the agreement as a whole and emphasizing a recurring tension between nationalism and internationalism, in particular regarding international arbitration of investment disputes, that runs through the individual papers' analyses of discrete provisions in the agreement..."

Find out more at www.transnational-dispute-management.com/journal-browse-issues-toc.asp?key=65

The McGill Journal of Dispute Resolution and the McGill Arbitration Student Society organised a symposium on Evidence in International Arbitration: Rules & Practices. Three arbitration practitioners discussed rules of evidence in the context of international arbitration. Following the presentations, there was a 30-minute moderated Q&A.

Anne K. Hoffmann is a Special Counsel in the arbitration department of Al Tamimi & Co. which she joined in 2013 after having practiced in London and Geneva for more than a decade. A lawyer qualified to practice both in Germany as well as in England & Wales, Anne’s practice focuses on international commercial and investment arbitration where she regularly acts as counsel in disputes arising under all major rules (in particular ICC, LCIA, ICSID, Swiss Rules, UNCITRAL) as well as in ad hoc proceedings. Anne has also served as an arbitrator on several occasions.

The Role of the Tribunal Secretary in International Arbitration

Annie Lespérance practices in the area of international arbitration. Prior to joining Cabinet Yves Fortier, Ms. Lespérance acted as Assistant Legal Counsel at the Permanent Court of Arbitration (PCA) in The Hague where she provided legal and administrative support to arbitral tribunals and parties in proceedings administered by the PCA concerning State-to- State, investor-State and international commercial disputes. Previously, Ms. Lespérance worked as a corporate lawyer at Stikeman Elliott LLP.

International arbitration in a flat world: Dos and Don’ts in picking your seat and your rules

Beyond Borders: Canada-China Relations in Business Professor Andrea Bjorklund, Yves Fortier Chair in International Arbitration and International Commercial Law, moderated a panel organized by the Asia Pacific Law Association of McGill (APLAM) to bring together perspectives from academia, business and law on the topic of business between Canada and China.

- Me Marie-Pierre Grenier, Director, Corporate Monitorship, Ethics & Compliance at SNC-Lavalin. Me Grenier will be explaining the challenges of doing business in China from a compliance standpoint.

- Mr. Peter Kruyt, Vice-President of Power Corporation Canada. Mr. Kruyt will be discussing his own experience in organizing trade deals with Chinese companies for PowerCorp.

A visit by Prof. Christina Binder

The Chair was pleased host Prof. Christina Binder, Section for International Law and International Relation, University of Vienna, from August 15 to September 4, 2015.

Prof. Binder gave a talk on September 4 on The Intersection Between Investment Law and Indigenous Peoples. The ICC, in cooperation with McGill University, has released a collection of the best articles written by participants of the Nappert Prize competition.

Edited by Professor Andrea Bjorklund, the collection is composed of nine articles chosen by experienced practitioners and arbitration experts from the inaugural Nappert Prize Competition in International Arbitration organized by McGill University's Faculty of Law in 2014.

To find out more, visit store.iccwbo.org/nappert-prize-in-international-arbitration

The McGill Faculty of Law, together with partners from the Charles D. Gonthier Legacy Committee, was honoured to host the Gonthier Memorial Lecture which will take place at the McGill University Faculty of Law and Faculty Club Ballroom in Montreal, Canada, on Friday, May 22, 2015.

A special Welcome Reception, co-hosted by several Canadian law faculties and law firms together with several key student-led law journals, kicked off the evening at McGill's Faculty of Law. The Gonthier Lecture of His Excellency Judge Crawford was then held at the Faculty Club of McGill University, in the main Ballroom. Directly following the lecture, there was a charitable Banquet Dinner.

The Private Justice and the Rule of Law Research Group and the McGill Arbitration Student Society organized two-day Symposium. The first day featured an arbitral moot opposing McGill and Queen's, and the second day, a panel with noted arbitration experts.

Vienna Arbitration Days is the leading arbitration conference in Austria, which the Fortier Chair attended this year. Professor Andrea Bjorklund spoke on panel examining Confidentiality vs. Transparency. The event took place at the beautiful Palais Niederösterreich, in Vienna. The Chair was officially launched with a conference that took the form of a conversation with L. Yves Fortier himself, as part of the Institute of Transnational Arbitration's Oral History Project

In 2014, the Fortier Chair also participated in the organization of the Nappert Prize Symposium and the CETA conference.

Update: The McGill International Journal of Sustainable Development Law and Policy (JSDLP) sat down with three experts at the CETA conference to ask questions on the new Canada-Europe free trade agreement, and get their perspectives on what impacts the treaty would have on the environment. You can watch the interview on Youtube.