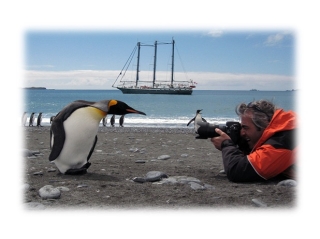 The Bieler School of Environment is proud to host

for our 2022 Environment Public Lecture

An Odyssey of Change

Filmmaker and author, Jean Lemire accumulates prizes and distinctions. Appointed emissary to climate change and to northern and arctic issues by the Government of Quebec in 2017, he is now traveling the world to make leaders aware of the pressing issues that we all face.

A privileged witness to the major planetary environmental issues, biologist Jean Lemire has spent most of his life navigating the world's oceans to document the effects of climate change. Accompanied by his crew aboard the SEDNA IV, a 51-meter oceanographic sailboat, they crossed the famous Northwest Passage in 2002, becoming the 7th boat in history to connect the Atlantic Ocean to the Pacific. They returned to the same place in 2015 to see the tragic fate of the Arctic, which is melting faster and faster under the impact of new heat.

In 2005-2006, Jean Lemire led a scientific expedition to Antarctica to document the effects of climate change. For 430 days, in complete autarky during a memorable winter, they became privileged witnesses of this world in turmoil. The images of this historic feat have toured the planet, in a human adventure with sometimes terrifying twists and turns.

He followed up between 2012-2015 by launching the 1000 Days for the Planet series, a three-year odyssey around the world to document major environmental issues. In collaboration with the United Nations Secretariat of the Convention on Biological Diversity, the tall ship traveled the world's oceans to document the sometimes troubled relationship between human and nature.

In his lecture with breathtaking photos and videos, he shares the highlights of his career and invites us to reflect on the future of humanity.