Faces and Names: Do we wish they were the same?

When learning to speak a foreign language, students typically are given a lesson in how to introduce themselves. This lesson often takes the form of a simple conversational dialogue such as, “Hello, my name is...What’s yours?”

But names can be complicated, and naming conventions and forms of address differ from culture to culture. Names can be confusing between speakers whose first languages use different logographic and phonological representations. Names also come with stereotypes and cultural assumptions. As I have found out after teaching English as a foreign language (EFL) in Japan for the past two decades, the beliefs associated with names often underly cultural differences in power relationships and assumed identities in the language classroom.

In this presentation I will first introduce the complicated role of EFL in the Japanese cultural context. I will then explore different ways in which languages and cultures approach self-introductions and how certain assumptions about names and ethnicity affect intercultural communication.

Audience members are encouraged to share their personal experiences they have had while learning and teaching language in which cultural assumptions about names, naming conventions, and physical appearance affected or influenced communication outcomes.

Finally, I will introduce some of my recent research into historical aspects of intercultural communication of the Irish in New France and Lower Canada. The focus will be on naming conventions of the time and how that may have affected communication and perceived identity from a historical past/present dialectical approach.

Part of the BILD Speaker Series 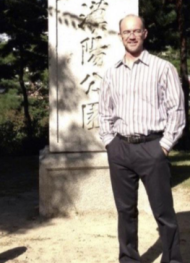 Matthew T. Apple is Professor in the Department of Communication, Ritsumeikan University, Japan, and Visiting Scholar in the School of Irish Studies, Concordia University. He is the lead editor of Language Learning Motivation in Japan and L2 Selves and Motivations in Asia. His research interests include intercultural communication, identity, and the Irish in Québec.
Last updated: 01/11/2019 - 15:24
Back to top
McGill University
Copyright © 2022 McGill University
Accessibility Log in