McGill athletes of the year unveiled for 2011 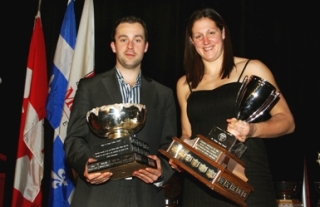 Picard-Hooper, a finance junior, and Chartrand, an education senior, received the Stuart Forbes and Gladys Bean trophies, respectively, sponsored by Adidas Canada, as the student-athletes who brought the most credit to the University by reason of their athletic achievements. Both were also announced as their respective Team MVPs.

In addition, Chartrand, the team captain, captured the Muriel V. Roscoe trophy, awarded to a graduating female athlete for proficiency and leadership.

Senior Guillaume Doucet, an alternate captain with the Redmen hockey team who hails from Anjou, Que., received the Richard Pound trophy for proficiency and leadership by a male athlete.

Sarah McCuaig, an all-Canadian distance runner from Waterloo, Ont., was awarded the Uldis Auders memorial trophy as the top sophomore in any sport, who best combines academics with athletics. She was also named as MVP of both the cross-country and track teams.

Basketball's Simon Bibeau of St. Bruno, Que., and hockey's Katia Clément-Heydra from St. Bruno de Montarville, Que., were announced as the freshmen of the year.

Andre Corbeil, a reporter from CTV Montreal, took home the McGill-Concordia Media Award for his dedicated coverage of university sports in the city.

It was an award-filled campaign for Picard-Hooper, a 5-foot-11, 185-pound forward, who became the 16th hockey player since 1948 to win the Forbes trophy, named after the distinguished McGill Sports Hall of Fame athlete who was decorated in both world wars and served 17 years as director of athletics. Picard-Hooper, a 23-year-old centre became the first McGill player to win the CIS scoring title since current Montreal Canadiens winger Mathieu Darche in 1999-00. Picard-Hooper also merited CIS All-Canadian honours and the OUA East conference MVP. In addition, he received the Bill L'Heureux and Senator Joseph A. Sullivan trophies as OUA and CIS players of the year, respectively. He registered the second-best season ever by a member of the Redmen with 91 points in 46 games overall, including a single-season school record 68 assists. In league play, he led the nation in assists and points with an 11-47-58 dossier in 28 games.

Chartrand becomes the fifth person to repeat as McGill female athlete of the year and is the first person to win both the Bean and Roscoe trophies. A physical and health education senior who measures 5-foot-10, Chartrand was the top-scoring defenceman in the country for the second year in a row, registering eight goals and 29 points in 20 regular season games, earning CIS all-Canadian status. In 43 games overall, she tallied 15 goals and 49 points. Chartrand capped her campaign off by receiving all-tournament at the CIS championship for the fourth consecutive year. It marks the sixth time -- and fifth consecutive season --  that a hockey player has received the Bean trophy since its inception in 1992.

Doucet, a 5-foot-9, 180-pound centre, is the seventh hockey player to capture the Pound trophy since it was introduced in 1992. The 24-year-old physical education senior was on the Principal's Student-athlete Honour Roll and merited Academic All-Canadian status. He expects to graduate this spring with 85 goals and 169 points in 181 career games.

McCuaig, a 21-year-old science sophomore, had a stellar 3.90 cumulative grade-point average (out of 4.0) while majoring in physiology. An All-Canadian in cross-country and winner of four gold medals at the Quebec track & field championships, she merited a spot on the Principal's Student-athlete Honour Roll and qualified for CIS Academic All-Canadian honours. McCuaig is the first runner to win the Auders trophy since it was introduced in 1982, in memory of Uldis Auders, a former quarterback with the Redmen, who did in a tragic mountain-climbing accident in Nepal.

The hockey Martlets, guided by head coach Peter Smith, earned the Martlet Foundation trophy for the fifth consecutive year. They posted a perfect 20-0 record in the Quebec league and went 33-0 against Canadian university opponents, en route to capturing the CIS national championship for the third time in four years. Overall, the Martlets posted a 36-5-2 mark, including games against the NCAA and a boy's midget team. They were ranked No.1 the entire season in the weekly Top 10.