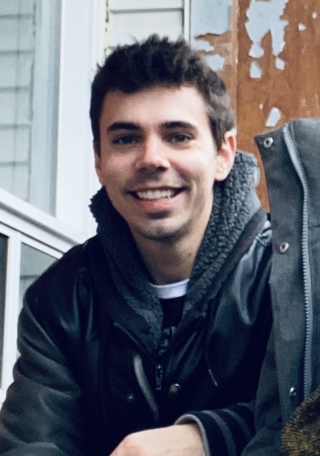 It is with great pleasure that the Centre for Interdisciplinary Research on Montréal (CIRM) welcomes Sam Victor, researcher in social anthropology and recipient of the 2022-2023 BMO postdoctoral fellowship!

Born in the United States, Sam Victor came to Montréal in 2008, a city which he now calls home. He holds a bachelor’s degree in French Studies (Concordia University, 2013), a master’s degree in Anthropology (Université de Montréal, 2018) and will soon receive his doctorate in Social Anthropology (Cambridge University). Sam is passionate about the ethico-moral and political dimensions of intercultural encounters. His research focuses on the reflexive and deliberative aspects of social relationships, especially the evaluative processes through which people determine what matters in their lives, as well as the suasive strategies they develop to communicate their values to others.

What inspired you to study the dynamics of religion and social anthropology in Montréal?

I come from the United States originally and I was interested in studying anthropology and the relations between people from different cultural backgrounds. I was particularly interested in immigration and refugee resettlement, so I moved to Montréal for my master's to study in a lab at the Université de Montréal that focused on intercultural relations. In anthropology, you typically travel abroad when you do fieldwork, and coming to Montréal, I had to think of a project. So, I thought of my home in Tennessee. The public sector in Montréal, which is involved in refugee resettlement, is explicitly not religious. There are religious organizations, but it is a stark contrast to where I come from where the local government is totally absent in funding infrastructure for refugees and immigrant services. It’s all done by the civil society, and in the case of Tennessee, it is strongly religious and there are big networks of churches that fill that gap. I found that explaining this difference was interesting to a lot of people in Montréal who had a negative assessment of religious organizations that were involved in what should be an impartial service and they believed there would be problems with proselytizing. I wanted to explore this question because I had worked in different volunteer and internship capacities at refugee resettlement organizations in Tennessee. I found that people with strong conservative Christian religious convictions who were working in that space actually had serious reflections about wanting to provide impartial service and not wanting to impose on people. This dynamic opened larger questions on religion and the public.

How do you think that your research project will reshape our understanding of religion and society in Montréal?

I think the research project that Dr. Hillary Kaell and I are going to start will shed light on that question through an in-depth case study of a community that is trying to navigate what it means to be a religious organization with claims on public space in the secularized context that is Montréal. It will provide a new understanding of how religious organizations and secular institutions, like municipalities and cities, can communicate the social value of public spaces to each other. These spaces, being religious or religiously marked, do not necessarily prohibit people who are not from different religious backgrounds or who are not religious from interacting together and creating a pluralistic space.

How has your time as a student in Montréal inspired your research and your academic trajectory?

I came to Montréal to study French at Concordia, and I have developed other academic interests over time, but Montréal has always been really welcoming. I have met a lot of interesting people here and I have always found the social questions dealt with here to be intellectually stimulating, and they’re very different from where I grew up. Montréal also gave me the ability to explore too. At Concordia, I was mostly in an anglophone environment even though I was studying French language and when I went for my master's at Université de Montréal, on the other side of the mountain, it was my first real exposure to francophone Montréal. My experience as a student at both universities has allowed me to see the stark differences between two different worlds and the interesting interactions between people. It will be interesting to start my work at McGill, which is another anglophone institution in Montréal that I have not been to.

What are your goals and expectations for your mandate as BMO Postdoctoral Fellow?

Conducting and building this research project would be the first thing. The other thing that attracted me was that CIRM is an interdisciplinary research centre and I think it would be a great opportunity to build a richer network of people to do research with as I move further in my career. To have the opportunity to recruit some students from different universities that can participate in research is also a really good experience for me pedagogically. It just seems like a really nice fit for this stage of my career.

How will your vision as our new postdoctoral researcher set a precedent for future academics conducting research either at CIRM or in Montréal in general?

In terms of recruiting students who are interacting across different levels in academics, it could send a helping hand back down to other students. One of the things that has helped me through my process was being a research assistant with other professors or postdoctoral fellows during my studies. It was an indispensable part of my own pathway. I hope to extend an opportunity for researchers that might be interested in the topic or interested in learning something about our ethnographic research methods. I will be in a middle position as a junior academic who will be learning from a network of professors and other people that work at the CIRM. So, I will be able to reach back and bring new people up that direction as well.

Can you speak about the importance of preserving heritage churches and other sacred spaces in urban areas that are becoming increasingly secularized?

What's interesting about this question is also one of the things that is interesting about studying this group of evangelicals in Montréal. They have a complex and critical discourse on the importance of heritage buildings, especially in a city that is growing, developing, and changing in a lot of ways, and that might lean at certain times towards commercial and private development and away from public and social interests. In a place like Montréal which has an architectural heritage that is mostly related to the Catholic Church, these buildings were conceived originally as having a public function, or at least an outward-facing one. It's interesting to track how people are trying to at least maintain its public function given the other kinds of developments going on in the city. There are also critical questions about how cities choose which properties are considered heritage and the advantages that are given to those properties. In a place that has such prominent European Christian heritage like Montréal in terms of the materiality of its heritage, it raises questions about the heritage status and privileged statuses of properties for indigenous people and new immigrant communities that are establishing religious communities. The overwhelming Christianity of heritage infrastructure is something that I keep a critical eye on, and it is also something that the people we are studying want to consider as well. It will be interesting to study people that are interacting with similar questions but very much from a different ideological perspective.

In the context of your research on repurposing former sacred spaces, how would you reconcile the struggle between conservative religious denominations that often challenge pluralistic tendencies in a city like Montréal, which is often characterized by its strong sense of plurality and secularism?

A group that has theological ambitions of evangelism is not likely going to appeal to the pluralistic secular sensibilities of either a municipality or non- and other religious people. One of the things that interests me is how they still interact and want to have a positive impact on people that might disagree with them and how that is viewed in reverse. One theological concept that is important to the members of the church we are studying is the idea of “co-consecration”, which is the notion that they will not consecrate the space as being uniquely Christian but as one that can be open for multi-faith purposes or for completely non-religious purposes. People who do not consecrate or religiously dwell in a space are likely not going to perceive themselves as being part of that project necessarily. The question that I think is interesting is whether it matters to the people who are co-consecrating or to the people who are willingly interacting with a space knowing that co-consecration is happening but who don't see themselves as being a part of an explicitly religious vision. It seems like more conservative Christian groups would have this issue more than a progressive group that doesn't need to assert its identity as Christian or as different from the world around it, which is a common understanding for evangelicals.

In a few words, how would you describe the city to non-Montréalers?

What is your idea of a perfect day in Montréal?

I think a good activity would be to cycle on the Saint-Laurent. Bring some things to eat and drink at the park, just hang out on the grass and watch people.