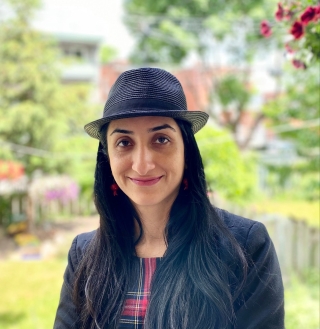 The Centre for Interdisciplinary Research in Montréal (CIRM) is very pleased to welcome urban studies researcher Leila Ghaffari as the recipient of the BMO Postdoctoral Fellowship 2021–2022!

Trained as an architect, she completed a master’s degree in urban design and land use planning before completing a doctorate in urban studies and urban planning under the joint supervision of Université de Tours and UQAM. Her postdoctoral fellowship project addresses the redefinition of third places (any space for socialization outside work and home) in a post-pandemic context. In particular, her project focuses on the “return to normalcy” of these spaces after lockdown. For her research, she chose to study the Hochelaga-Maisonneuve neighbourhood, specifically Promenade Ontario. Leila Ghaffari is also a housing policy advisor at Vivre en ville.

What attracted you to Montréal? Why did you decide to study this city?

“The history of Montréal is extremely interesting and rich for urban studies. It has a working-class past and has experienced the decline of its suburban neighbourhoods and their revitalization. The city I studied in France, Nantes, is comparable to Montréal with its industrial past. It too has experienced urban decline and revitalization. So, there were similarities between these two cities that drew me to Montréal to make comparisons for my doctoral thesis.”

How do you see your mandate as a CIRM postdoctoral fellow?

“Besides carrying out the research project I proposed, I plan to participate in CIRM’s activities and its dynamics. I will also be part of a network of researchers working on similar topics, so I see opportunities for collaboration. I can’t wait to get started!”

As an architect, what fascinates you about urban dynamics?

“I love the creative side of architecture, but I have observed that the architect is often at the centre of the idea he or she develops, a vision that does not work in the city and in society. You need to have a more holistic view when it comes to a block, a neighbourhood, a city, etc. I imagined myself working on a larger scale to be able to understand the dynamics that influence the built environment that I am so passionate about. It was important for me to have a more co-constructive understanding of the built environment and to take into account how it is perceived by the inhabitants. I don’t consider myself an architect per se anymore; I work in the field of urban studies and enjoy studying the connection between people and architecture.”

How did your academic and professional experiences inspire a research project on “third places” and the relationship between city dwellers and their territory?

“Social justice is a topic I was always interested in when I was studying cities. When I was doing my thesis in urban design in Iran, I was looking at how people behave in urban spaces, and I was interested in how design can give people a certain freedom and generate certain behaviours. I was very interested in the ‘psychological’ side of the city. When I was in France, I was studying the social cohesion policies in small and medium-sized cities and how they affect vulnerable populations in these territories. I then turned to housing issues. I saw housing as an important aspect of social and spatial justice. So, I began to study gentrification from that perspective. I chose gentrification because I saw a lot of debate around it, but no solutions. There was a void in all of that and I thought we should accept that gentrification exists, then see how we can manage it and counter its negative aspects. I decided to work on this idea after I identified this gap. I started this reflection in France and continued it in Quebec. I chose these two places to compare two different institutional contexts. Why study third places? I observed in my research that the transformation of commercial streets is very important for gentrification. In some cases, it is this process that triggers gentrification, like in Hochelaga-Maisonneuve. There are meeting places, businesses and services in these commercial spaces that disappear and are replaced by meeting places, businesses and services that meet the needs of another population. The third places that suit a given population do not suit another population. Finally, I saw that the pandemic caused a shock that intensified the transformation of third places. So, I would like to study the influence of the pandemic on these places for different types of population.”

How does the vitality of Montréal neighbourhoods compare to other cities?

I participated in a research project on the cultural vitality of Montréal neighbourhoods, focusing on three boroughs of the city: Sud-Ouest, Rosemont—La-Petite-Patrie and Côte-des-Neiges. For me, Montréal is a mosaic of vitalities that vary depending on the neighbourhoods and their populations. For example, Côte-des-Neiges is a territory that welcomes immigrants and serves as a place of passage and anchorage. When immigrants arrive in Montréal, Côte-des-Neiges is a refuge where they can meet while adapting to their new city. The Sud-Ouest, for example, has a working-class past that has built its identity. Hochelaga-Maisonneuve also has an industrial past, it is a neighbourhood that has experienced a decline and a revitalization by its population. The community sector is, in my opinion, the major strength of the Montréal territory and what sets it apart from the other cities I have studied. The community stakeholders are very important. In Nantes, for example, the presence of associations is very strong, but the community stakeholders are not as strong. This is very specific to Québec and this makes it very strong in terms of citizen participation. Montréal is a city with a very strong cultural vitality, with a citizen dynamic that is supported and sometimes led by the public sector.”

In a few words, how would you describe the city to non-Montréalers?

“Cultural vitality, community life and a mosaic of neighbourhoods.”

What is a perfect day in Montréal in your opinion?

“My perfect day would start with a coffee in my neighbourhood. Then I would take a walk through the central parts of the city. In the Sud-Ouest, for example, or in Hochelaga-Maisonneuve. Towards the end of the day, I’d go sit on a terrace.”

Essential symbols: The Olympic Stadium tower, the Plateau-Mont-Royal and its triplexes, the Lachine Canal, Mount Royal Park, the industrial heritage in general, the city’s universities, and the terraces.