Dreaming of a new downtown: a workshop on art and urban space 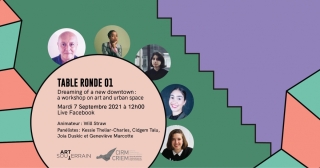 As Montréal, like many cities, imagines the future of its downtown after the COVID-19 pandemic, several questions might be asked about the possible role of art in transforming our city centre.  What role can art play in creating a city centre that is inclusive, socially-engaged and open to underground or alternative forms of cultural expression? Can we imagine a role for art and culture in the downtown which goes beyond that offered by official institutions, tourist-oriented festivals, and commercial entertainment? If, as predicted, the spaces of downtown office work lose their attraction, might we picture other uses for those spaces – uses which will reinvent downtown as a cultural and social territory? With three major universities located in its downtown, could Montreal make this area a platform for artistic intervention and experimentation?​

For the event Créer des ponts, the Centre for Interdisciplinary Research on Montréal (CIRM) collaborates with Art Souterrain and invites the students from three downtown universities (Concordia University, McGill University and UQAM) to reflect on these questions. More precisely, the participants will be asked to elaborate on a new role for art in Montréal’s downtown.