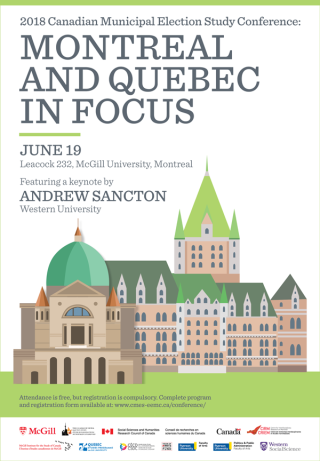 "Montreal and Quebec in Focus"

On June 19th, McGill University will host the Conference on the Study of Canadian Municipal Elections organized by Éric Bélanger (Department of Political Science, McGill / CIRM) and supported by the CIRM. The theme of this conference, "Montreal and Quebec in Focus", will be the occasion for a specific study of the municipal elections of 2017.

Launched in September 2017, the Canadian Municipal Elections Study (CMES-ÉÉMC) examines data from surveys of voters and candidates in municipal elections of eight Canadian cities (Montreal, Quebec City, Toronto, Mississauga, London, Winnipeg, Calgary and Vancouver). In addition to the contributions of many researchers associated with the CMES, this year's conference will host a keynote by Andrew Sancton (Department of Political Science, Western University).

To reserve your place and consult the complete schedule: https://www.cmes-eemc.ca/conference/