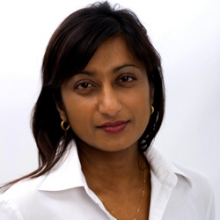 Natasha Rajah completed her Ph.D. in 2003 at the University of Toronto and did her postdoctoral training as U.C. Berkeley. She joined the Department of Psychiatry, McGill University and the Douglas Hospital Research Centre in 2005. She has received the Canadian Institute of Health Research New Investigator award from the Institute of Aging (2007-2012), a Junior 2 Fonds de Research Quebec – Sante Research Scientist (2013-2016), and was named one of the Top 50 under 50 scientists by Québec Science in 2012.

Dr. Rajah's research interest is in the cognitive neuroscience of aging, memory and dementia prevention. Her lab uses a variety of neuroimaging methods, in conjunction with different analytic approaches (i.e. univariate, multivariate, variability and connectivity analysis) to understand how adults encode and retrieve episodic memories from a neural network perspective, and how healthy aging and risk-factors for Alzheimer’s Disease affect brain structure, function and episodic memory.

Her ongoing research is funded by CIHR and NSERC.