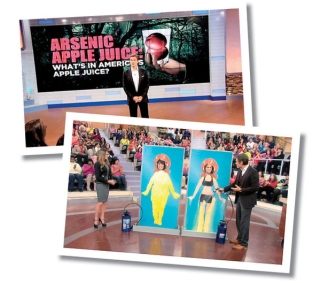 The wizardry of Dr. Oz

The surgeon and TV celebrity has succeeded in winning fans and influencing public health debates - which troubles some experts.

Mehmet Oz's followers believe he is a trustworthy, serious-minded (and hot) physician.

His equally fervent flock of critics say he is a fad-foisting, ratings-grubbing (and smart) TV celebrity.

In the 10 years since Oprah dubbed him "America's Doctor," the 53-year-old Oz has shown he is comfortable in both roles.

"I just absolutely like him," said Maria Southard, 57, a food-service supervisor in the Philadelphia public schools. "I believe what he says and repeat it at home and work."

It is that unquestioning faith that health experts increasingly find troubling.

"Oz has become an actor playing the role of doctor," said Joe Schwarcz, director of the Office for Science and Society at McGill University, which fact-checks scientific information disseminated to the public.

The problem with Oz is that he can be neither wholly trusted nor dismissed, said Schwarcz. One day, he will offer a medically sound explanation of how hepatitis C attacks the liver, and the next proclaim that the syrup from an Andean root vegetable is the new secret to losing weight.

The claims made on Oz's show often derive from some small experimental finding, said Schwarcz, "then they run with it and convert what would be a one-yard gain into a 99-yard touchdown."

Oz declined to be interviewed for this article. His spokesman, Tim Sullivan, said, "We should have more faith in the viewer." Oz presents information, Sullivan said, trusting that the audience is sophisticated enough to judge its merits.

In a recent episode, Oz invited two participants to stand behind panels bearing life-size images of cartoonlike women whose bodies were slathered with yellow goop.

"What's the secret to melt your fat for good?" Oz asked. "It's not about drastically cutting your calories or exhausting yourself with cardio. . . . I'm going to show you how to supercharge your hormones so you can melt your fat fast."

He then hosed the goop off one of the panels.

During the discussion that followed, Oz asked Natasha Turner, a Canadian naturopath, to explain how the supplements she has recommended adjust hormones to dispatch belly fat.

"I had never heard of this before I read Natasha's book," Oz said.

"I just don't understand," said Schwarcz, "how he can stand there nodding at the absurdities of what some of his guests are saying."

A distinguished cardiothoracic surgeon at New York-Presbyterian Hospital in New York, Oz is a Harvard grad who earned his medical degree at the University of Pennsylvania and an MBA from Wharton. He owns several patents and has written hundreds of articles in medical journals.

One of his best-selling books, You: The Owner's Manual, recently revised on the 10th anniversary of its first printing, has sold 2.7 million hardcover copies worldwide.

His daytime TV show, now in its fifth season, has won three Emmys. His viewership has fallen 23 percent since 2011, according to the A.C. Nielsen Co., while two competitors, Dr. Phil and Ellen DeGeneres, have gained ground.

On Feb. 4, the Oz media empire, which already runs a website, a blog, and an active Twitter feed, will launch a monthly magazine called the Dr. Oz The Good Life.

At 52, impeccably dressed, gym-rat fit, and glowing with health, Oz holds himself to rigorous standards. He exercises regularly and fuels his body with blueberries, nuts, and spinach-laced smoothies.

"He's sort of an enigma," said Schwarcz. "When he first appeared on Oprah, he was good. He talked about eating more vegetables and exercising." A steady diet of sensible advice, though, does not sustain ratings.

When Oz promotes the benefits of raspberry ketones, garcinia cambogia, red palm oil, green coffee extract, strontium, and Ayurvedic herbal remedies, he chooses his language carefully, using what Schwarcz calls "weasel words" such as may, might, and could.

Oz often notes that it is best to get nutrients from whole foods, and he urges consumers to check the purity and dosage of supplements. But since they are not well-regulated, labels may not be accurate.

The show distances itself from the retail frenzy that inevitably results when Oz gives his generic blessing to a supplement.

In May, he launched the "It's Not Me" campaign to disavow any link to products claiming to have his endorsement. Consequently, at the GNC store in the Gallery Mall on Market Street, the shelves stocked with items that Oz has praised are annotated with signs declaring "featured on popular daytime health shows," and a wink.

Explaining the show's wild swings from measured to hyperbolic, Sullivan said, "someone that's adversarial would call it inconsistency. We would call it diversity in programming."

A clear example was the 2011 debate over arsenic in apple juice.

That summer, after hearing concerns from consumers, a small advocacy group in upstate New York sent juice samples to a lab for testing. The results showed elevated levels of arsenic.

In July, Food & Water Watch, a nonprofit based in Washington, put out a release on the findings.

"We wrote a letter to the FDA asking them to lower the acceptable levels," said the group's assistant director, Patty Lovera.

Several weeks later, Lovera got a call from the producers inviting her to appear on The Dr. Oz Show.

Oz's staff did its own study, sending three dozen samples to an independent lab for testing. The results showed that in 10 of the samples, arsenic levels were higher than 10 parts per billion, the limit set for drinking water.

"They really hyped it," Lovera said, adding that that was no different from most broadcast news reporters she had worked with. "It's TV. It's what they do."

The segment proved explosive. "We're used to the food industry and the FDA . . . blaming the messenger," said Lovera. "But they really piled on" Oz.

The FDA said that Oz failed to distinguish between organic and inorganic arsenic, when only the latter is harmful.

On Good Morning America in September, physician Richard Besser accused Oz of fearmongering. Besser, who went to medical school with Oz and served as acting director for the Centers for Disease Control and Prevention before joining ABC, said Oz was irresponsible for saying, "We are poisoning our own families."

"You have absolutely no evidence that they're doing that," Besser said.

Oz held his ground, although in a later episode, he amended his message: "I should have said, 'We may be poisoning our families.' "

Even at the highest levels found in the samples, the arsenic did not pose the threat of acute poisoning. "My concern," he said, "was chronic toxicity."

Soon after, the FDA conceded that it had withheld some test results showing unacceptably high levels of arsenic in apple juice. A Consumer Reports study later confirmed the problem.

A year and a half later, in July 2013, the FDA announced it was setting the limit for arsenic in apple juice at 10 parts per billion.

While that outcome scored a victory for Oz's credibility, he lost points for the mixed messages.

In the drumbeat for a segment about green coffee bean extract, for instance, Oz said, "You may think that magic is make-believe, but this little bean has scientists saying they have found a magic weight-loss cure for every body type. . . . When turned into a supplement, this miracle pill can burn fat fast."

Yet, his site warns against this very sort of language.

"Avoid supplements that make miracle claims - or seem simply too good to be true. . . . If it says you can lose weight without changing your diet or exercising, that's also a red flag." Asked to explain the contradiction, Oz's spokesman said, "Obviously, we didn't mean an actual miracle. You use language for descriptive and entertainment purposes."

The author of the study that inspired Oz does not think green coffee deserves magical status yet.

"Dr. Oz just caused a floodgate of people thinking green coffee was going to help them lose weight," said Joe Vinson, a chemistry professor at the University of Scranton. "It is well-documented - in animals, at least. But the consumer doesn't know the dose. . . . The supplement industry is a Wild West."

The pilot study, published in an obscure journal, involved just 16 people who got green coffee extract pills of varying doses, or a placebo, for 22 weeks. Vinson did not do the research. He was paid by Applied Food Sciences, a Texas company that makes the pills, to write up the findings.

While promising, the study was tiny and brief, Vinson said. The subjects did not eat an American diet. "And they came to the clinic frequently. They were monitored closely. It was not like free-living, see you in six months."

It may be that green coffee extract helps people lose weight, Vinson said. "But one would like to see multiple studies done."

Of all Oz's claims, the most unverifiable has to be that men who have sex more than 200 times a year will reduce "their physiological age by six years."

As with many of Oz's dramatic assertions, the science behind it is lacking.

"There is limited information available from scientific studies about an association between sexual activity and health," said Howard S. Friedman, professor of psychology at the University of California, Riverside, and coauthor of the 2011 book The Longevity Project.

While Oz's work as a surgeon - he still operates once a week - demands exquisite precision, his role as a TV celebrity does not.

On May 19, 2012, Oz stopped in Philadelphia during a national tour offering free 15-minute physicals. The event, which drew 300 people, was held at Temple University.

"A television show is a bully pulpit," Oz said during his address. "It gives you the chance to shout."