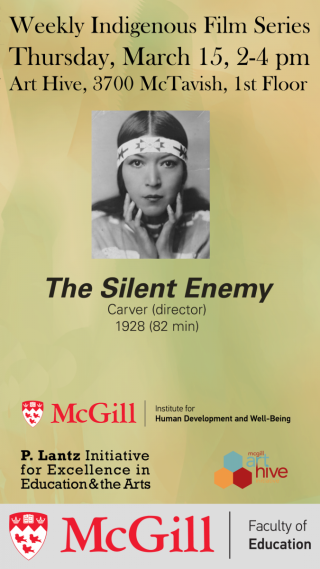 This silent film, The Silent Enemy: An Epic of the American Indian, was purported to show the traditional ways of Ojibwe people, and unusually for its time, employed Native Americans as actors, extras and advisors.

The film was under-appreciated when it was shown in the early 1930s though reviewers of the time stated, The Silent Enemy... it is beautiful, it is superbly acted and in many of its scenes, tremendously exciting…” (Robert Sherwood, review of The Silent Enemy, Toronto Star). The desire to make a film that would authentically record pre-contact Native American life was very much at the heart of Burden’s production.

The actors in the film are another interesting facet of this film, the producer attempted to hire Anishinaabe from northern Ontario but was not a successful as he had hoped – instead the film includes actors who were from other locales – the main actors were Chauncey Yellow Robe, (Sioux, c. 1867-1930) and Molly Alice Nelson (Penobscot, 1903-1977) a vaudevillian dancer known as Molly Spotted Elk and “Buffalo Child Long Lance” an actor who had participated in Wild West Shows, however before the film opened Long Lance was found to have been born Sylvester Clark Long a man of mixed heritage (African American, white and possibly Cherokee).

The film was lost for many years, until the original version was found in the 1970s.