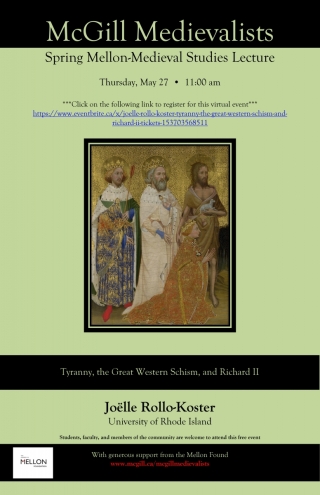 This presentation will put the focus on the influence of the Great Western Schism (1378-1417) on late medieval political events. I will try to pose and frame certain historical questions around the role the “religious” crisis could have played on politics. For example, did the Schism influence the late medieval definition of tyranny? After all, popes of either obedience insulted their rivals with accusations of usurpation (intrusus). Was an usurper that different from a tyrant? Further, when Louis of Orléans was assassinated on the order of the duke of Burgundy, Jean Petit, Burgundy’s lawyer argued that 1-it is permissible to kill a tyrant; 2-the Duke of Orléans was a tyrant; 3-thus the killing of Orléans was permissible, defending as such the death of the tyrant. Backtracking a bit I will set the deposition of Richard II within this charged political atmosphere. When Richard II was accused of behaving like a tyrant, how different was it from accusations levied against Urban VI, and Benedict XIII for example.

Joëlle Rollo-Koster is Professor of Medieval History at the University of Rhode Island. With an eye on historical anthropology, her research focuses on the social and cultural history of the late European Middle Ages, from the 1300s to the 1420s. She is especially interested in the papacy and its late medieval capitals, Avignon and Rome. She has published numerous books and articles on the Avignon papacy, the Great Western Schism, and death in the later Middle Ages. Her latest book, currently in production with Cambridge University Press, is a new history of the Great Western Schism. It is entitled The Great Western Schism, 1378-1417: Performing Legitimacy, Performing Unity.

This event was made possible through the generous support of the Mellon Foundation.