In the long run, emotional abuse might hurt a child as much as violence or neglect 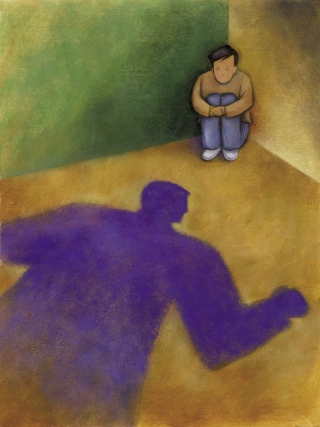 Emotional abuse may be as harmful as physical abuse and neglect. This finding led by a team of researchers at McGill University complements previous imaging research showing that emotional and physical pain both activate the same parts of the brain.

Emotional abuse, which includes behaviors such as ridicule, intimidation, rejection, and humiliation, is much more common than physical abuse and neglect. Worldwide prevalence estimates suggest that approximately one third of children experience emotional abuse. However, “although people assume physical abuse is more harmful than other types of abuse, we found that they are associated with similar consequences”, says David Vachon, a McGill professor in the Department of Psychology and the study’s first author. “These consequences are wide-ranging and include everything from anxiety and depression to rule-breaking and aggression.” The discovery may pave the way for more effective means of addressing how different forms of child abuse should be recognized and treated.

Vachon, working with his former post-doctoral mentor Robert Krueger, used data from a study by Dante Cicchetti (University of Minnesota) and Fred Rogosch (University of Rochester) that was conducted through Mt. Hope Family Center. Cicchetti and Rogosh have been running a summer research camp for over 20 years to study low-income, school-aged children ages 5-13 years.  About half of the camp-goers had a well-documented history of child maltreatment. Various types of child-, peer-, and counselor-reports were used to assess psychiatric and behavioral problems, and the camp counsellors were not told which campers were abused. Using their data, Vachon studied 2,300 racially and ethnically diverse boys and girls who participated in the summer camp.

“We also tested other assumptions about child maltreatment,” adds Vachon, “including the belief that each type of abuse has specific consequences, and the belief that the abuse has different consequences for boys and girls of different races.” Once again, the study produced surprising findings: “We found that these assumptions might also be wrong. In fact, it seems as though different types of child abuse have equivalent, broad, and universal effects.”

The study may significantly change how researchers, clinicians, and the public think about child abuse. “One implication,” adds Vachon, “is that effective treatments for maltreatment of any sort are likely to have comprehensive benefits. Another implication is that prevention strategies should emphasize emotional abuse, a widespread cruelty that is far less punishable than other types of child maltreatment.”

When asked about next steps, Vachon said, “One plan is to examine the way abuse changes personality itself--does it change who we are? The point is to go beyond symptoms and ask whether abuse changes the way we tend to think, feel, and act”.