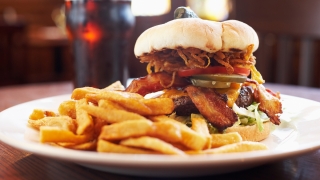 If you’re fat, can you blame it on your genes? The answer is a qualified yes. Maybe. Under certain circumstances. Researchers are moving towards a better understanding of some of the roots of obesity.

A McGill-led research team has recently discovered that for girls who are carriers of a particular gene variant (DRD4 VNTR with 7 repeats), the crucial element that influences a child’s fat intake is not the gene variant itself. Instead, it is the interplay between the gene and girls’ early socio-economic environment that may determine whether they have increased fat intake OR healthier than average eating compared to their peers from the same class background. The DRD4 repeat 7 is found in approximately 20 per cent of the population and is known to be associated with obesity, especially in women.

Interestingly, boys who had the same gene variant were not affected in the same way. But more about that later.

“We found that among girls raised in poorer families, those with DRD4 repeat 7 had a higher fat intake than other girls from the same socio-economic background,” says Laurette Dubé, the lead researcher on the study and Scientific Director of the McGill Centre for the Convergence of Health and Economics. “But we also found that girls with exactly the same gene variant who came from wealthier families, compared to these with the same economic conditions, had a lower fat intake. This suggests that it’s not the gene acting by itself, but rather how the gene makes an individual more sensitive to environmental conditions that determines “for better or worse” a child’s preference for fat and consequent obesity as the years pass by.” The researchers used food diaries kept by the parents of close to 200 young Canadian children (average age of four) from the MAVAN birth cohort in Montreal, Quebec and Hamilton, Ontario. They calculated the percentages of fat, protein and carbohydrates the children were taking in. They also measured the BMI of the children, and used saliva tests to identify which of the children were carriers of the DRD4 repeat 7 gene. They then used the family income as a way of measuring the quality of the socio-economic environment in which the children were being raised, and an indirect marker of the food environment as well (availability of fruits and vegetables or fast food in the neighborhood, for instance).

The research, which was published today in an article in JAMA Pediatrics, builds on recent work by others which suggests that certain genes, including DRD4 7 repeat, function as “plasticity genes”. This means that those with these gene variants may be more “open” to their environment, in general, than those without them. So that, depending on the environment in which the individual with the gene lives, it can either increase OR decrease the risk for certain neurobehavioral conditions.

Because carriers of the DRD4 repeat 7 were already reported to have an increased risk of obesity, the researchers wondered whether it was, instead, a “plasticity gene”, whose effects would vary depending on environment.

“We wondered if the higher fat intake already reported by us in 7-repeat girls could be modified by the social environment - and we showed that it can, as the fat intake will increase or decrease in 7-repeat girls according to their socio-economic status,” said Dr. Patricia Silveira, based in the Faculty of Medicine at the Universidade Federal do Rio Grande do Sul in Brazil, the first author on the study done in collaboration with McGill, University of Toronto and McMaster University. “This is important because we change the focus from the gene (previously "blamed" for the risk for increased fat preference) to the environment, since the effects of the gene will vary according to the conditions in which the child is raised.”

“We previously assumed that the 7-repeat variant caused weight gain in these patients by increasing the rewarding aspects of certain foods. These new results suggest a different way that the gene might affect food choices” says Dr. Robert Levitan. Levitan is a co-investigator on the project, leader for the childhood obesity program in the MAVAN cohort, and Senior Scientist at the Centre for Addiction and Mental Health (CAMH), has studied the DRD4 gene in various female adult overeater populations. Interestingly, the researchers found this effect to be true only in the girls that they tested. They speculate that this may be because, from an evolutionary standpoint, it may have been more important for girls to be able to gain weight easily to adapt to adverse conditions in order to reproduce. Another possibility they advance is that at age four, it may simply be too early to see these effects in boys since boys and girls gain weight at different stages at this age, and may also have different behavioural responses to hunger and feelings of satiety.

“All we can say with certitude from this research is that the gene variant will influence food choices differently according to the environment, but we do not know HOW the gene is influencing food preferences,” said Silveira.

“These results underscore the importance of moving beyond a ‘one-size-fits-all’ approach to childhood obesity prevention,” said Dubé.”We need to move towards targeted approaches that focus on populations that are particularly vulnerable to both genetic and environmental factors: those who are biologically more vulnerable under adverse environments are those likely to be more responsive to improvements in their conditions.”

To read the full paper by Silveira et al in JAMA Pediatrics: http://archpedi.jamanetwork.com/article.aspx?articleid=2484697