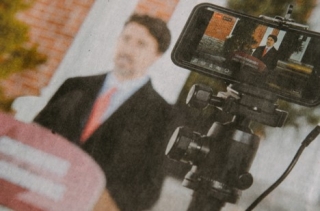 Montreal, August 18th, 2021 | A project headed by McGill researchers will bolster efforts to monitor and analyze serious cases of mis- and dis-information, including foreign interference, in the 44th Canadian federal election.

Mis- and dis-information are a growing threat to the integrity of free and fair elections and to the strength of democracies the world over. That is why McGill University and the University of Toronto are announcing the creation of the Canadian Election Misinformation Project to monitor and respond to mis- and disinformation incidents and threats during the 44th Canadian federal election.

To sign up for regular updates from the Project, please visit: https://www.mcgill.ca/maxbellschool/canadian-election-misinformation-project.

False or deceptive information (misinformation) spreads rapidly online while malicious actors engage in well-resourced attempts to confuse or mislead (disinformation). Together, these largely online phenomena have meant that even the most basic facts have become contested, and democratic deliberation and debate have become more difficult.

“The reality of contemporary politics is that much democratic process now takes place online, in a new digital public sphere that has been shown to be vulnerable to abuse and manipulation,” says one of the Project’s lead investigators, Taylor Owen. “The first line of defense in addressing these potential harms is understanding how Canadian citizens consume information and whether mis and disinformation promoted by both domestic and foreign actors changes how they behave during an election.”

Taylor Owen is the Beaverbrook Chair in Media, Ethics and Communications, and Director of the Centre for Media, Technology and Democracy at McGill’s Max Bell School of Public Policy, where he is an associate professor. He is joined by Peter Loewen—Professor in the Department of Political Science at the University of Toronto and at the Munk School of Global Affairs and Public Policy, where he is also Associate Director, Global Engagement and the Director of the Policy, Elections, and Representation Lab (PEARL)—and Aengus Bridgman—a PhD candidate at McGill studying digital politics—who will also be leading the Project.

The Project, a partnership between a range of academic and civil society organizations, aims to improve our understanding of the role that mis- and disinformation play in Canada. It is funded by the Public Policy Forum, Heritage Canada’s Digital Citizen Contribution Program, and the Rossy Foundation. Partners include CPAC, youth mobilization organization Apathy is Boring, Simon Fraser University’s Digital Democracies Institute, and the Institute for Strategic Dialogue.

“Canadians are rightly concerned about the dangerous impacts of misinformation and disinformation, particularly during our most important democratic moments,” says Bridgman. “The Canadian Election Misinformation Project, the first of its kind in Canada, brings together the best techniques in social and traditional media monitoring alongside daily surveying of Canadians. The full team will be on the front lines of defending the Canadian election against bad actors.”

In the post-election period, the Project will provide an overall assessment of the role that mis- and dis-information played throughout the election period.

About the Media Ecosystem Observatory

The Media Ecosystem Observatory is the leading research organization dedicated to understanding Canadian information ecosystem health. Since the 2019 Canadian Federal Election, the Observatory has been working on understanding how, why, and when the information that Canadians see and share online has implications on real-world behaviours. Ultimately, their work is about safeguarding Canadian democracy against online harms and digital threats by developing an evidence-based model for information ecosystem health.

Established in 2018, McGill’s Max Bell School of Public Policy is committed to the research, teaching, public outreach, and practical advocacy of sound public policy, with each of these four dimensions grounded in a solid understanding of the overall policy process, not merely as it is described in theory but as it exists in the real world, with all its imperfections and limitations. The principle-based design of policy solutions to important problems, the interaction of policy development with partisan politics, and knowledge of the workings of the machinery of government all play central roles in the activities of the Max Bell School.