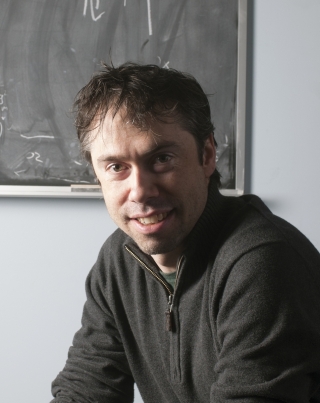 McGill University astrophysicist Matt Dobbs is the recipient of the 2019 Killam Research Fellowship in Natural Sciences.

The announcement was made today by the Canada Council for the Arts, which revealed this year's winners of the prestigious Killam Program, composed of the Killam Prizes and the Killam Research Fellowships.

Dobbs, a professor in McGill's Department of Physics and associate member of the Department of Electrical and Computer Engineering, was rewarded for his project, Unveiling the Cosmos with a New Paradigm Digital Radio Telescope, involving the revolutionary CHIME radio telescope inaugurated in British Columbia in 2017.

CHIME, the first major research telescope to be built on Canadian soil in more than 30 years, is radically different from most telescopes. The massive digital telescope has no moving parts; rather, it records radio signals with over a thousand stationary antennas, then reconstructs the overhead sky using signal processing techniques implemented on custom electronics and a farm of customized computers. The innovation that led to CHIME (short for the Canadian Hydrogen Intensity Mapping Experiment) was made possible by creative new technology developed at universities across Canada.

"The 'game-book' for exploiting measurements from this type of telescope is far from maturity," says Dobbs. With research time afforded by the Killam Fellowship, he plans to work with his CHIME team collaborators to develop new techniques for commissioning and calibrating the instrument. They will use CHIME to make new measurements that will elucidate the expansion history of the universe, and unravel the source of newly discovered enigmatic flashes of distant radio light called fast radio bursts.

“Physicists are turning increasingly towards the cosmos as the richest laboratory for displaying nature’s fundamentals – the building blocks of matter and how structures, from atoms to galaxies, are put together," says Dobbs, who is also a member of the McGill Space Institute and a Senior Fellow in the Canadian Institute for Advanced Research's program on Gravity and the Extreme Universe. “New technology in radio astronomy is allowing us to probe the cosmos in ways that seemed far out of reach not too long ago. We’re pursing these strategies to construct a laboratory on the sky.”

The Killam Research Fellowships provide outstanding scholars across all disciplines with two years of release time from teaching and administrative duties so they can carry out large-scale, widespread interest research projects. Each fellowship winner receives a total of $140,000 over two years.

Also included in today's announcement: The Killam Prize in Natural Sciences was awarded to McGill alumnus Yoshua Bengio (BEng’86, MSc’88, PhD’91). Bengio, currently a professor at Université de Montréal, is known as one of the world’s foremost experts in terms of artificial intelligence and is a deep learning pioneer. As the Canada Research Chair in Statistical Learning Algorithms, he is the founder and scientific director of Mila, the Institut québécois d’intelligence artificielle, the world’s largest deep learning university research group. In 2019, he is co-recipient of the A.M. Turing Prize, considered the “Nobel Prize for Computer Science,” which he receives jointly with Geoffrey Hinton and Yann LeCun.

The Killam Prizes honour eminent scholars in the humanities, social sciences, natural sciences, health sciences and engineering. These outstanding scholars actively contribute to groundbreaking research and their advances have positive impacts on our lives. They each receive a $100,000 prize.

For more background on Matt Dobbs' research:
Cowboy science and the origins of the universe

Learn more about the Killam Program