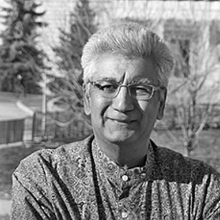 He has done extensive research in the field of human settlements planning, urban design, housing and urban agriculture. More specifically, his human settlements research deals with the issue of where and how people live interactively via the creative engagement of designers in the process. Currently, he is working on the question of food security and urban sustainability both in North America and abroad, particularly in informal housing in developing countries. The series of his action-design projects related to the “Edible Landscapes” assimilate urban agriculture (UA) in cities, neighbourhoods and communities, which requires including, or better still sustainably integrating, food systems within urban structures and urban designs.

In the 1970’s the MCHG did pioneering work on the subject of utilizing rooftop wastelands, which was achieved by putting rooves under productive use. Today, this has become a standard LEED design norm in buildings. In the 1980's and 90’s the team looked at housing and growing activities as an integrated way of living in the informal sector in developing countries. Since the beginning of the new millennium, the main focus of his research is making the edible landscapes, and the field has grown under the larger umbrella of the UA. First, he led a study of community gardens of Montreal; demonstrating where and how gardens are situated in the city, the geo-socio impact of this important activity, who are the users and its varying effect in different neighbourhoods of the city; the issues involved, and more specifically, demonstrating the need for expanding the program. From 2004 to 2008, colleagues from the Schools of Architecture, Environment and Urban Planning of McGill University and the RUAF (a leading NGO working in the field of UA) worked together on a global UA project in three cities on three continents. The first noteworthy outcome of the project, because of their involvement and that of other similar groups and researchers working in Uganda, was the 2005 land-use legislation change in Kampala: legalizing urban agriculture and fish-farming as formal activities that could be practiced within urban boundaries. This is remarkable, because most cities are still struggling with this legislative challenge. The team’s projects in Colombo and Rosario creatively used UA in urban upgrading of popular and new housing estates and were well adopted by users. The results of this comparative and comprehensive global project were showcased at the World Urban forum III in 2007 at Vancouver to coincide with the 30th anniversary of the founding of the UN-HABITAT and shared with more than 10,000 delegates including 200 mayors and a number of ministers from various countries.

Bhatt is the author of Resorts of the Raj: Hill Stations of India and co-author of After the Masters: Contemporary Indian Architecture and The Urban Problematique. Reviewing Resorts of the Raj, the renowned economist and the former Ambassador to India John Kenneth Galbraith wrote: “The British in India have now emerged as earlier did the Romans as great architects and committed builders. Nowhere was this more evident than in the hills to which they, and other, resorted in the summer. All this is wonderfully evident in this elegant book which I strongly recommend.” After the Masters, the first significant work on post-colonial contemporary architectural production in India is an important contribution to the assessment of global modern architecture; it has also become a standard by which the following books on the subject have been judged. He has also contributed to standard reference publications such as Encyclopaedia of 20th Century Architecture (2004) and Time Saver Standards for Urban Design (2003). He has also written chapters in books, including: Actions: What You Can Do with the City (2008), Ground-breaking Food Gardens (2014). He has also co-edited research seminar proceedings, scientific journal issues and written many research papers and academic articles.

He has been involved in a number of pioneering research areas: a study of the informal housing sector in India (How the Other Half Builds) which was used to change formal low-cost housing norms; the introduction of market housing ideas in China (Housing a Billion; and the international seminar Rural Housing: The First Step to Market Housing that he organized in Chongqing, Sichuan, 1993).

At McGill he has served on numerous committees and forums including the Senate. He was the Vice-Chair of the University Grievance Committee and the Senator representing the Faculty of Engineering.