Running five city blocks under the Muslim quarter, Zedekiah’s Cave also known as Solomon’s Quarry, is a 20,000 square metre meleke limestone quarry that was used extensively in the past to construct a number of royal and holy buildings in Jerusalem. Other names that the quarry is referred to as include, “Zedekiah’s Grotto, Suleiman’s Cave, the Royal Caverns (or Royal Caves or Royal Quarries), Korah’s Cave and Migharat al-Kitan (or “Cotton Cave”). It is Jerusalem’s largest quarry and it was excavated over several thousand years, spanning from Jeremiah’s Grotto and the Garden Tomb to the walls of the Old City. As the natural geological source for several sacred buildings’ materials it has been left rather neglected, considering how many people visit other important sites in its proximity. There are guided tours

from Sunday through Thursday for an admission fee and also small private music events shows. With the intention of reconnecting the magnificent but neglected quarry with the Muslim quarter of the Old City above, a number of architectural interventions have been implemented.

First, a series of lightwells (14) were strategically introduced in open spaces in the urban fabric above. Extraordinary beams of light puncture the dark cave and provide comfortable diffused lighting for day use. Second, a sculpture park was constructed near the entrance of the cave using 1/2 scale limestone towers in the precise form of the voids created by the lightwells. Finally, and most importantly, a second entrance was excavated, connecting the Muslim

Quarter of the Old City to the quarry. The second entrance was introduced as a large complex for a performing arts center with several buildings that step down with the topography towards the quarry entrance. There are 7 separate buildings in total, many of them with multiple entrances at various levels of the urban street as well as the descending terraced platforms. Programmatic spaces within the buildings include recording studios, small concert venues, and studio spaces. Solomon’s Quarry Performing Arts Center will allow artists to learn and collaborate in preparation for shows that are held in the Freemason’s Hall of Solomon’s Quarry. 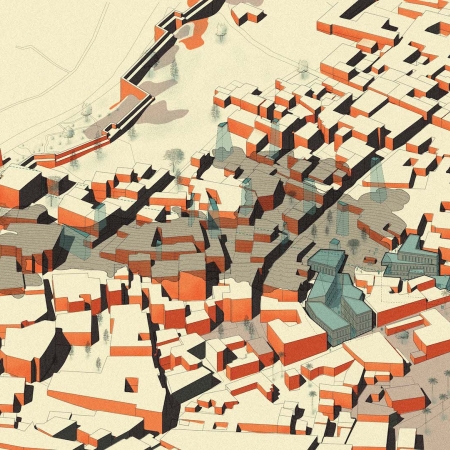 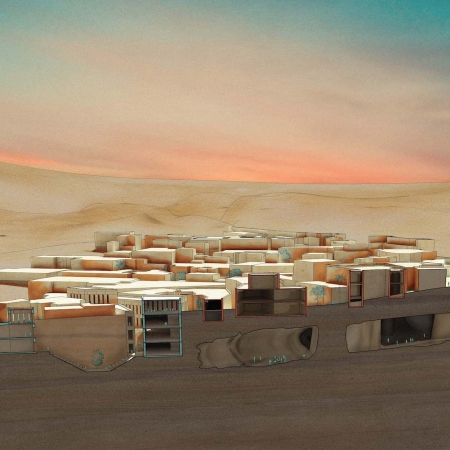 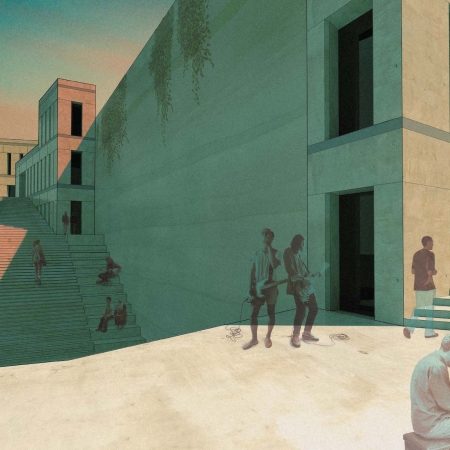 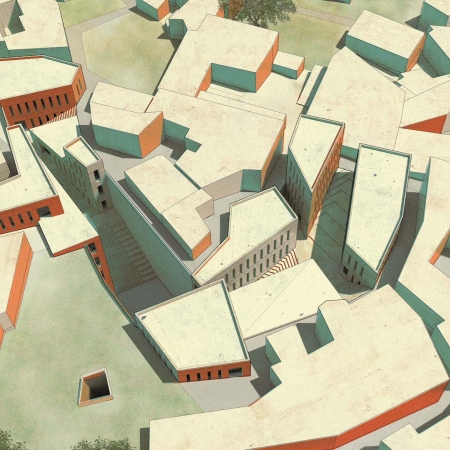