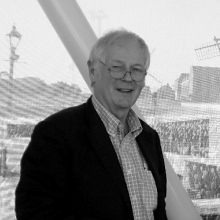 Pieter Sijpkes was, as a student, deployed in 1972 to the then underprivileged neighbourhood of Point St. Charles in the Sud Ouest of Montreal by the late professor Joseph Baker. He has continued to live and work there, working on several aspects of community development.

As a student, and later as a professor, Pieter Sijpkes also experimented with the creation of large-scale ice structures on the McGill campus, taking advantage of the low winter temperatures.

Various courses taught by him have engaged students in physically constructing ice architecture. Different methods were used. One was to suspend stretchable nylon fabric, thus allowing the creation of thin, curved, structural ice surfaces by means of spraying water onto the sheets in below freezing conditions. Another method used was to create solid ice and snow structures using scaffolding, among them a 20 foot high catenary arch cast from 2000 ice blocks made in two-liter milk cartons, and the biggest one, a one-quarter scale model in ice and snow of the Roman Pantheon on the McGill campus in 1996 to celebrate the Centennial of the School. Group picture of the School Community 1996

Since 2007 the experimentation has moved in door to avoid the newly fickle winter weather, working in cooperation with the Mechanical Engineering Department he developed a robotic Additive Manufacturing ice rapid prototyping process.