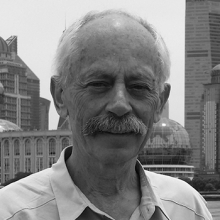 David Covo is an Associate Professor and past Director (1996-2007) of the School of Architecture at McGill University, where he has taught since 1977. He is currently teaching design, drawing and sketching, and professional practice, and he has maintained a private consulting practice since 1976. His research activities are related to his teaching and architectural practice and address drawing and the design process, building science, the special architectural requirements of the disabled, and housing in developing countries. He has worked professionally in Montreal, and in Pakistan in 1976 with John Schreiber and Yasmeen Lari, Architects, and as an academic he been active in teaching and/or research in Mexico, China, Romania, South Korea and Singapore.

In the spring of 2007 he did field work in Singapore and South Korea with colleagues from the University of Calgary on a project titled Design as an Instrument of Public Policy, which was funded by the Asia-Pacific Foundation. In the spring of 2008, he was co-organizer, with Douglas MacLeod, of two 11/2 day seminars on Green Building Design which were presented in Seoul and Beijing, with funding from the Government of British Columbia and the Canada Mortgage and Housing Corporation. In 2010, he worked again with PI Douglas Macleod on a project titled Resource Positive Envelope Design with funding from the Asia Pacific Partnership and Environment Canada. Current research addresses the architecture of the university campus and the design history of McGill College Avenue in Montreal.

In addition to other University duties, Covo chairs the advisory committee responsible for the review of new building projects, works with the Planning Office on campus planting and landscape design, and chairs a working group responsible for the university’s art collection. He is one of four representatives of the Faculty of Engineering on the University Senate and is currently in his second term; as a Senator, he was a member of the Committee on the Rights of Senate and recently completed a three-year term as a member of the Steering Committee.

He is a Member of the Order of Architects of Quebec and a Fellow of the Royal Architectural Institute of Canada, and is a past President of the Canadian Architectural Certification Board.

For several years, he has been a member of a task force working with the Royal Architectural Institute of Canada and Athabasca University on the design and implementation of a new professional architecture program based on a hybrid model that combines the apprenticeship tradition and online education. The work of the group was recognized by Athabasca University in June 2012 with awards of the Order of Athabasca to each of the members of the task force.

Covo has been active on architectural design juries and selection panels, and in the winter of 2012, he chaired the design jury for a PWGSC/AANDC sponsored international competition calling for proposals for the Canadian High Arctic Research Station in the Canadian Arctic.

An enthusiastic sailor, he is a past president of the sport governing bodies for sailing for both Quebec and Canada. In 1999, he served as Team leader for the Canadian University Sailing Team at the World University Games, Mallorca, Spain, and in 2001, as Assistant Chef de Mission (operations) for Canada, at the World University Games in Beijing. He is currently a member of the Board of Directors of the Pan American Sailing Federation and a member of the Canadian delegation to the International Sailing Federation.